Morocco: Trying to get into the Sahara Desert

Some of you may have seen on the news that Morocco has been experiencing some unusual levels of rain and flooding.  South of the Atlas Mountains the rain fall is very low typically and the nearer the Sahara you get the closer the typical rainfall levels go towards zero.  But recently the weather has not been typical and we have been witnessing 1 in 5 to 10 year rains - maybe more.  This means that many river and lake beds that would normally be completely dry and dusty were filled and gushing when we needed to cross.  The situation has been quite serious locally, with bridges swept out, cars swept away and a number of deaths.

So it is quite unusual that the thing that would keep getting in the way of our attempts to enter the Sahara desert was excess water!  But unusual or not three routes we tried to take into the desert were all blocked by water.  We eventually did make it into the Sahara desert, but that is the topic of an upcoming blog.

The map below shows where the Sahara actually is.  It is incredibly vast with just the the top northwest edge falling within Morocco.  And looking at all those countries shown below, which ones would you consider safe for a lone family looking to sample the Sahara to 4wd into?  I'd say Morocco, most of Tunisia and perhaps some of Western Sahara.  And so this is one of the things that makes Morocco special - it's a safe country that allows adventurous tourists travelling under their own resources to sample some of what lies further beyond those borders.

First attempt to get into the Sahara

We set off from our camp site in Ouarzazate pictured below, heading for a town at the edge of the desert called Foum Zguid.  It had been raining overnight, but we didn't at this stage appreciate how much rain had fallen upriver.

The road into Ouarzazate was only just above the water when we crossed, but later wouldn't be.

This is another bridge we crossed a few miles to the north of Ouarzazate before we eventually reached a police road block and were turned around. 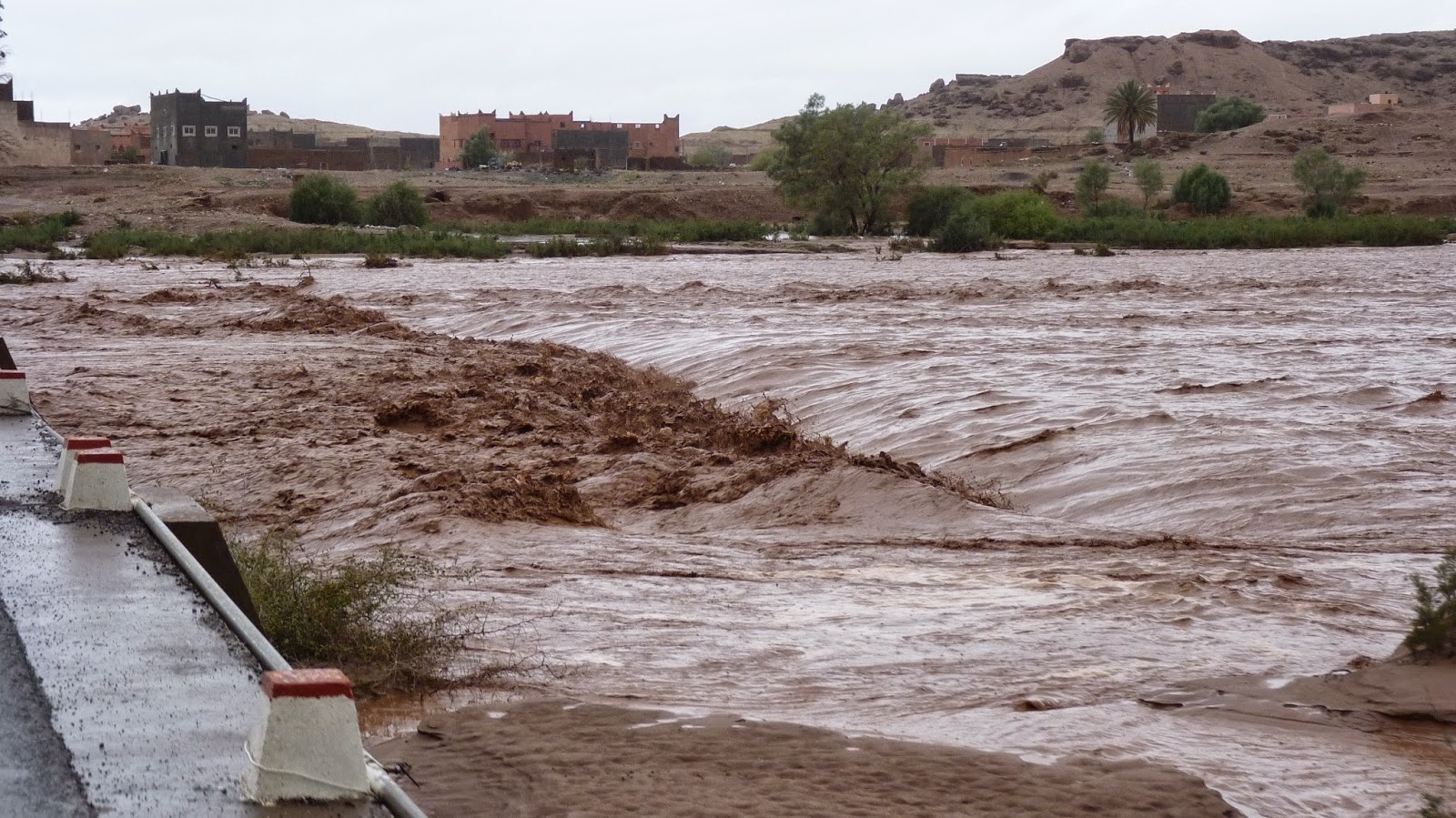 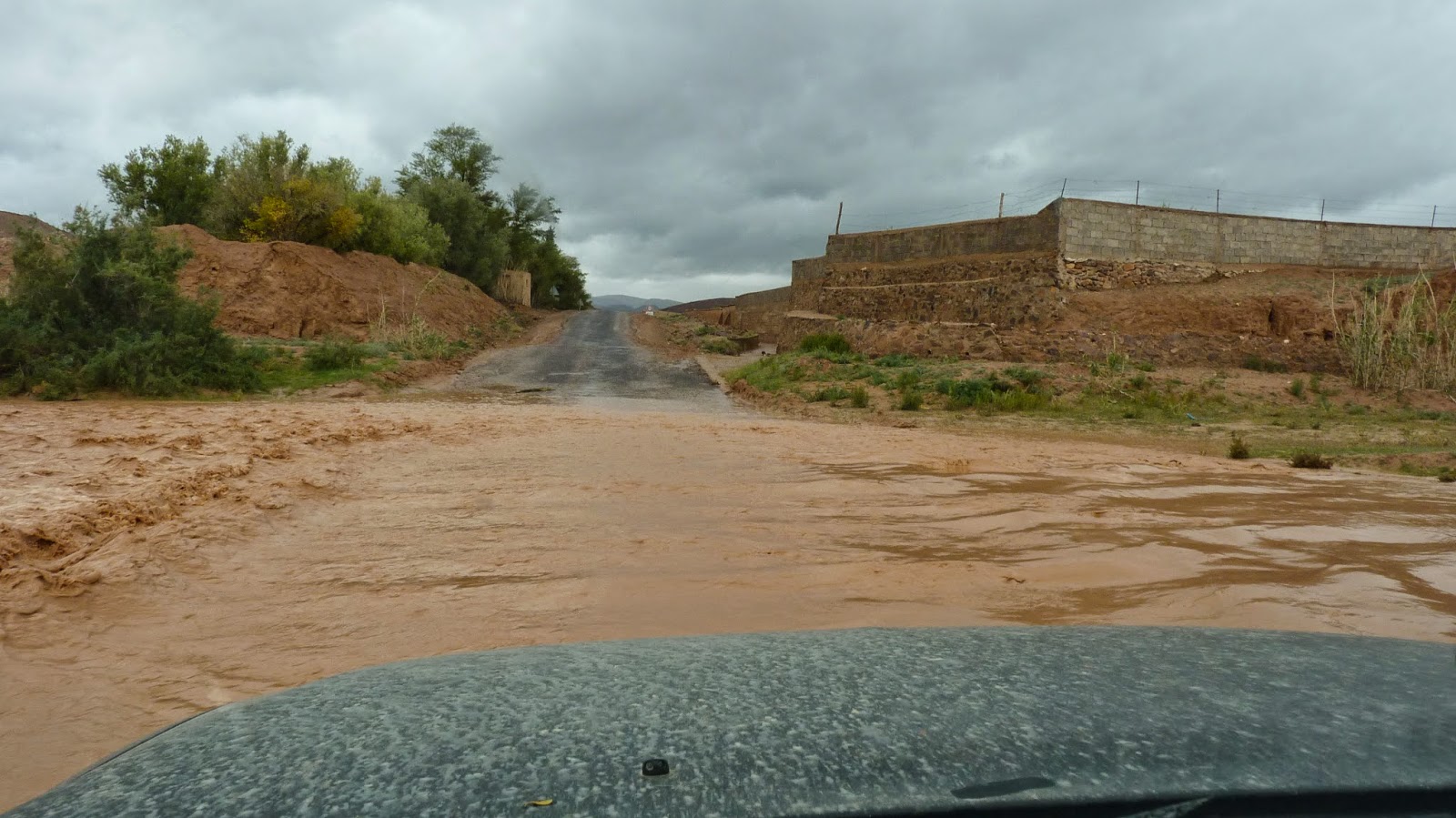 With a limited choice of routes we headed for another important town in the region called Zagora, where we spent a couple of day waiting out the flooding.  A nice meal in a cafe like the one pictured below costs equivalent to £2, or NZ$4.  And that even includes cooked meals.

This is the market in Zagora.  Usually this would be dusty and hot, but as seen in these photos the rains had turned it temporarily into a seldom seen - in these parts - mud bath.

The market has different areas selling different types of goods.  The part of the market pictured below sold meat/butchery goods.

Here Polka and the kids shop for fruit while our (unrequested yet somehow compulsory) guide watches on. What you can expect from a 'guide' here is to be guided to expensive craft stalls where the guide will get a cut of the profits from anything you buy.

Departing Zagora bound for Merzouga.  The water had fallen below the level of this crossing and the road had reopened. 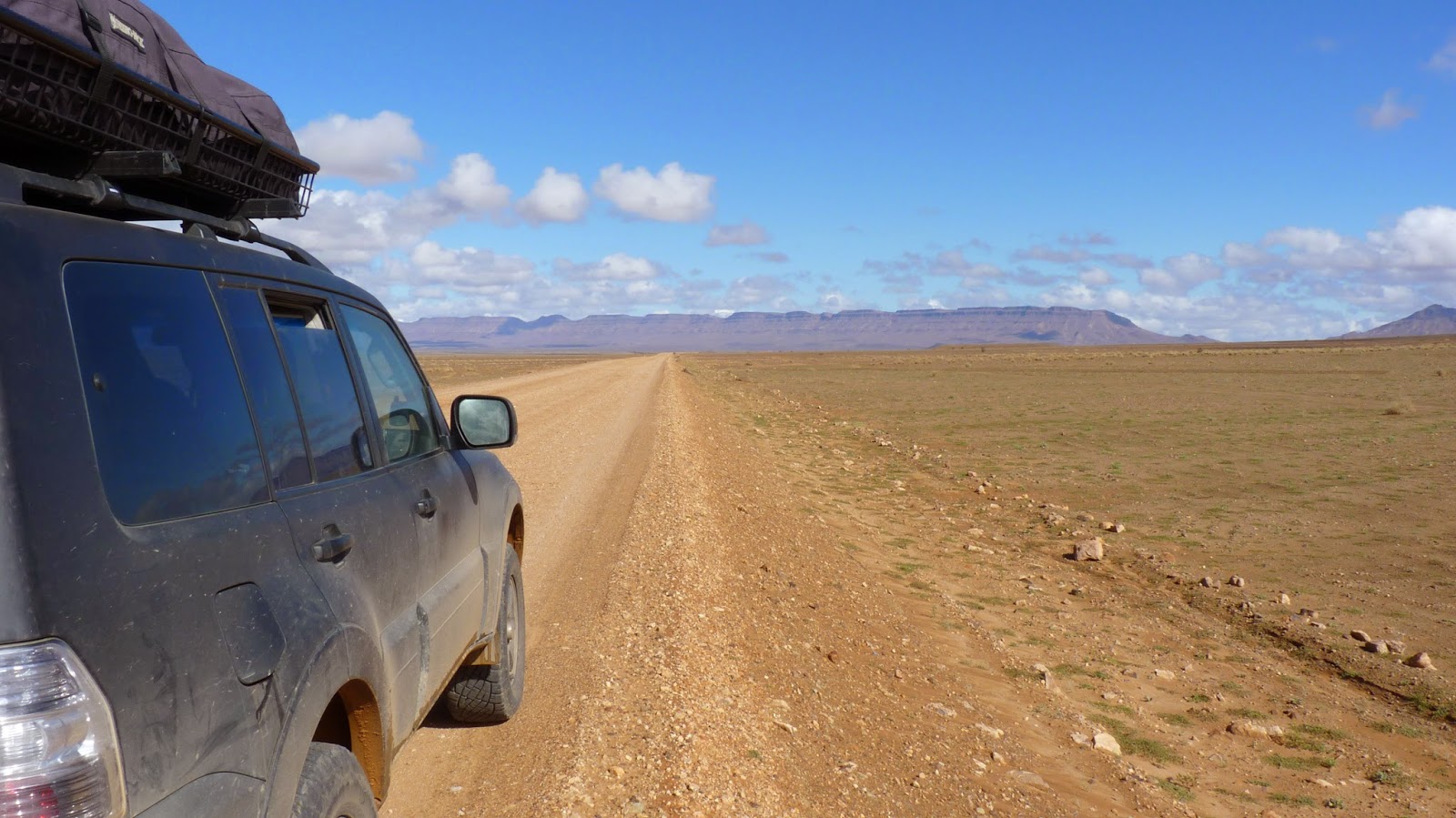 Passing through villages along our route 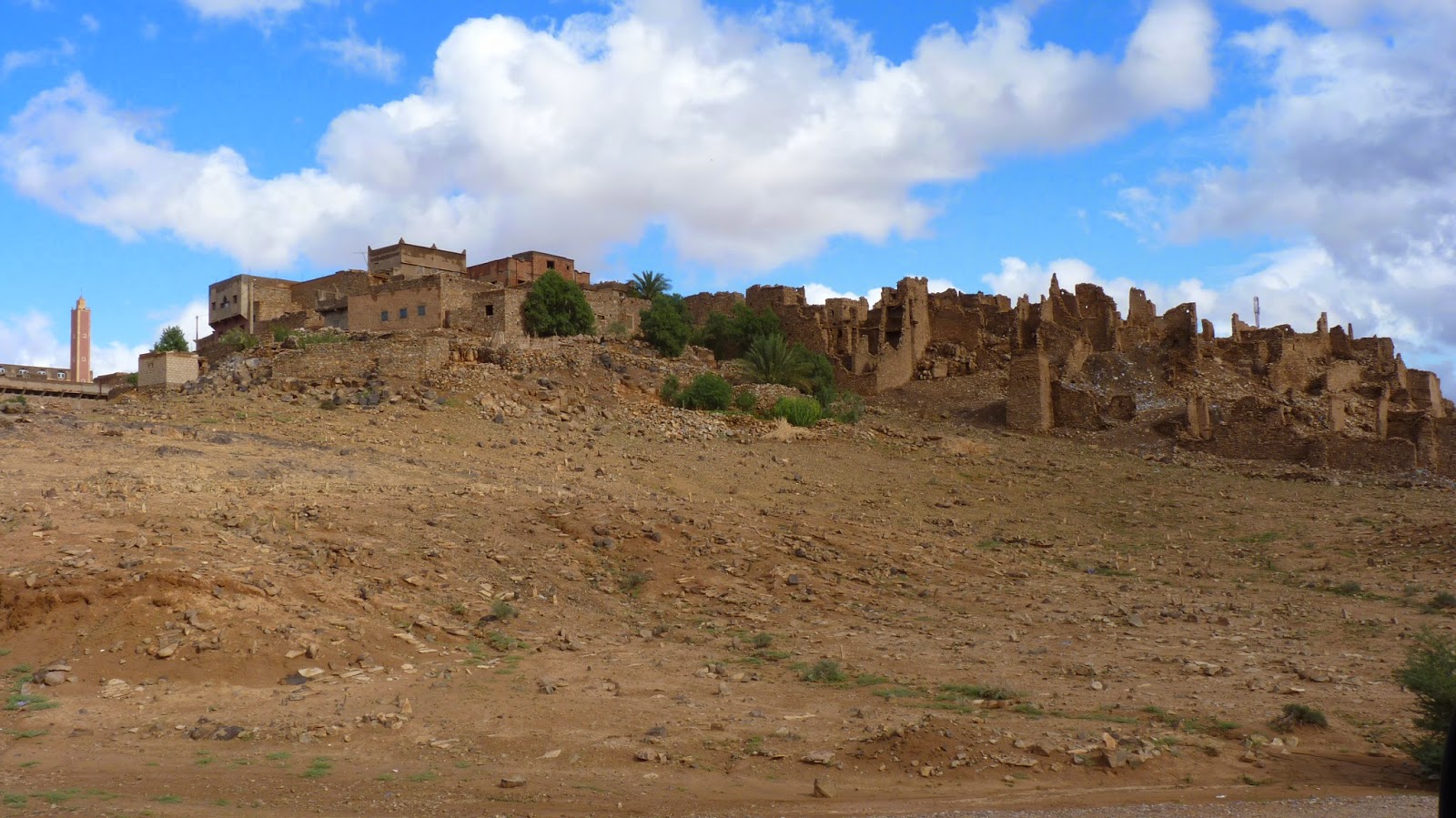 This flooded crossing was passable and a welcome sight, as we were at the time being pursued by a group of kids demanding more lollies. 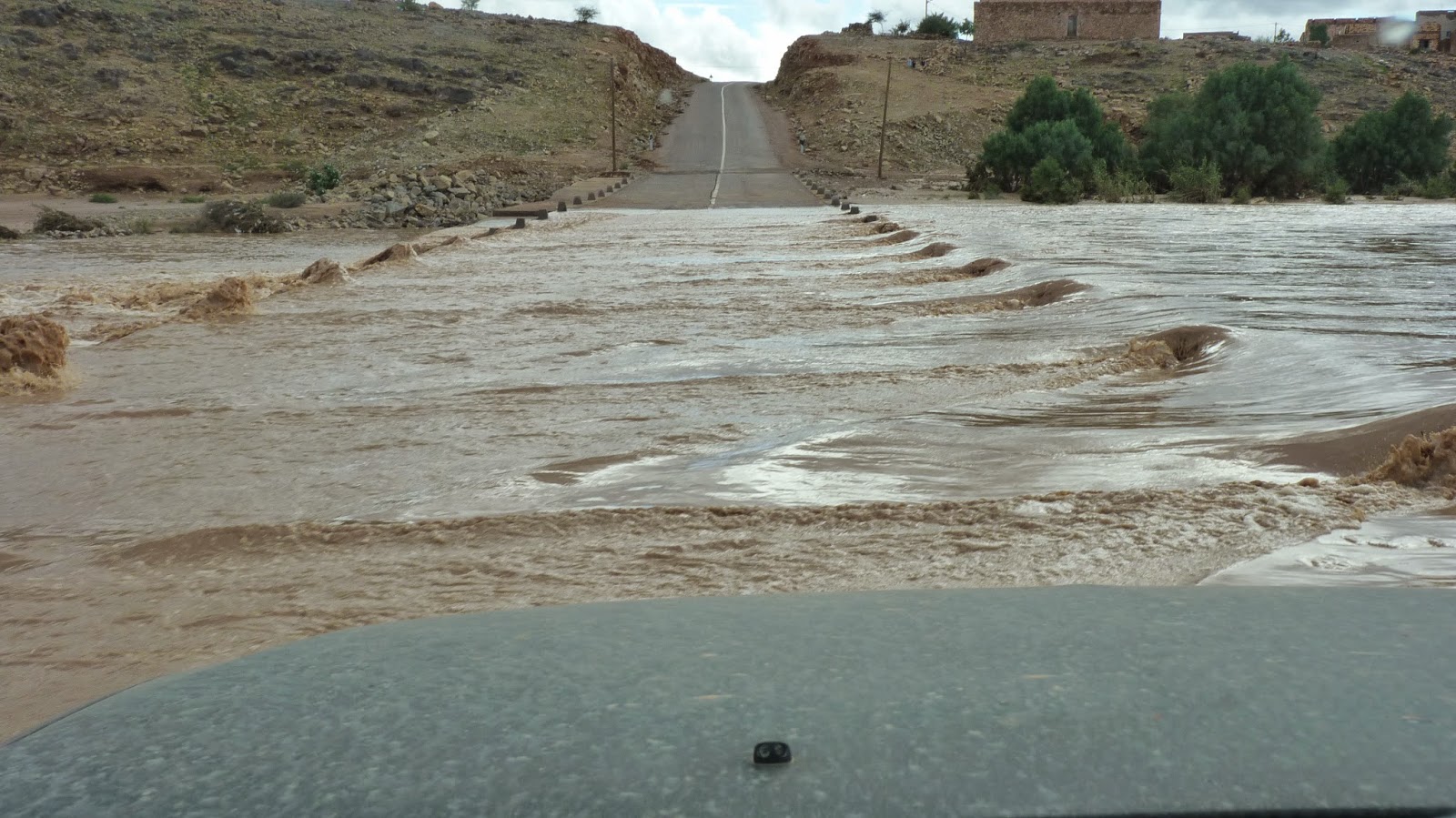 A section of still flooded road, also covered in mud left by the receding flood waters. 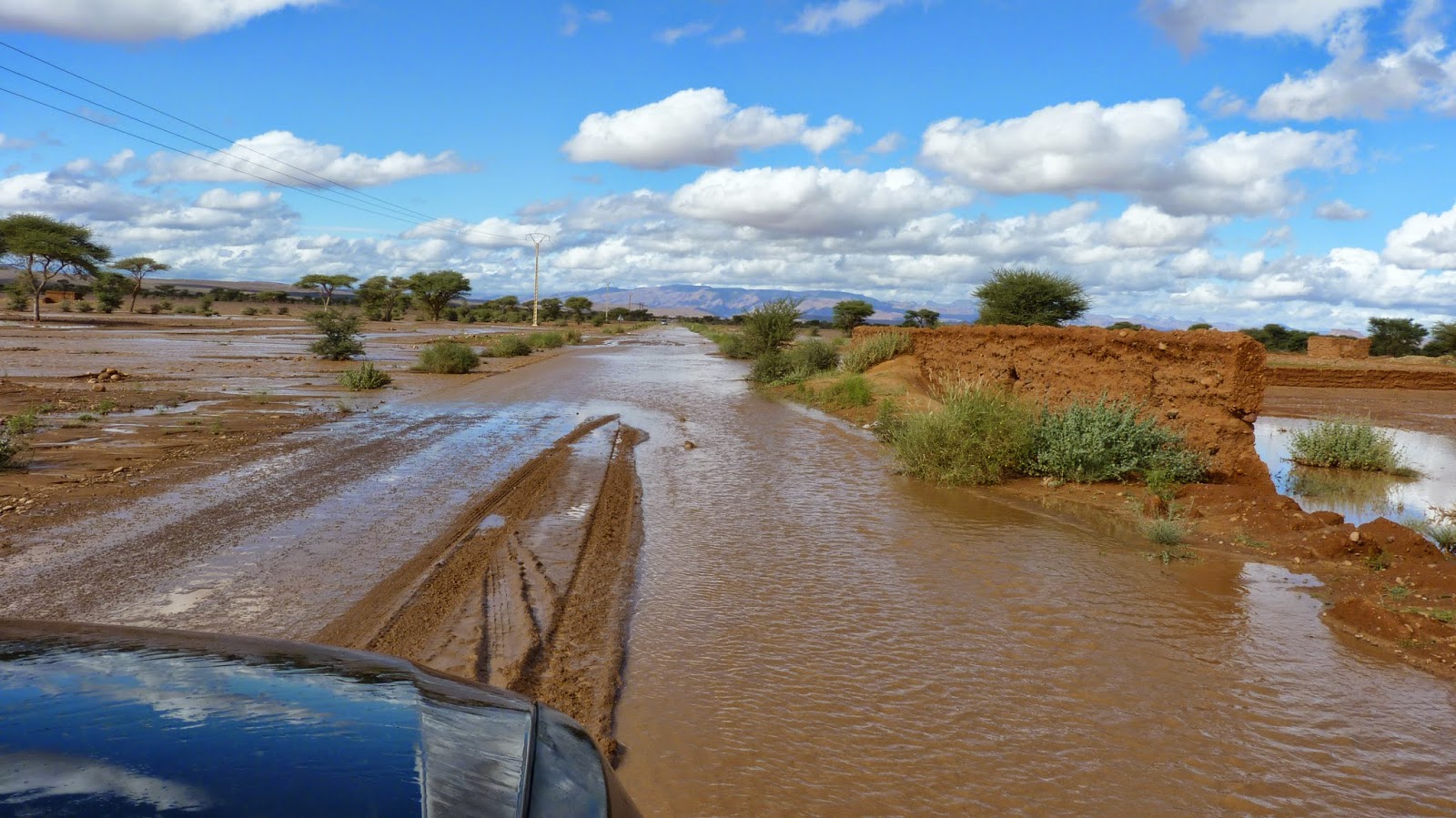 Often when we stop Micky Moo stays in the car but shuffles over to Beany's seat, from where she gets a more direct view of Peppa Pig playing on the DVD player attached to the back of my headrest.

After lunch we came across this bridge completely washed out.  I was later told a 4wd was trying to cross this bridge when it collapsed and got swept out.  I understand the 4wd got swept out too!  However, when we arrived the waters had dropped considerably and a policeman showed me that I could cross the river. This was not difficult to cross and could easily have been crossed in 2wd (though I always put the car in locked 4wd for such obstacles just to be sure), yet the number of locals at the riverbank trying to force themselves upon us river crossing guides got overwhelming and rather annoying.  I accelerated past two idiots who were trying to guide me slowly down the track to the riverbank as if we were in some low slung sports car.  You must understand that these 'guides' do not come free and are not optional - they just turn up and announce that they are your guide and then they're with you until you lose them or pay them.  I'll pay those that provide a genuine service, but lose the rest. 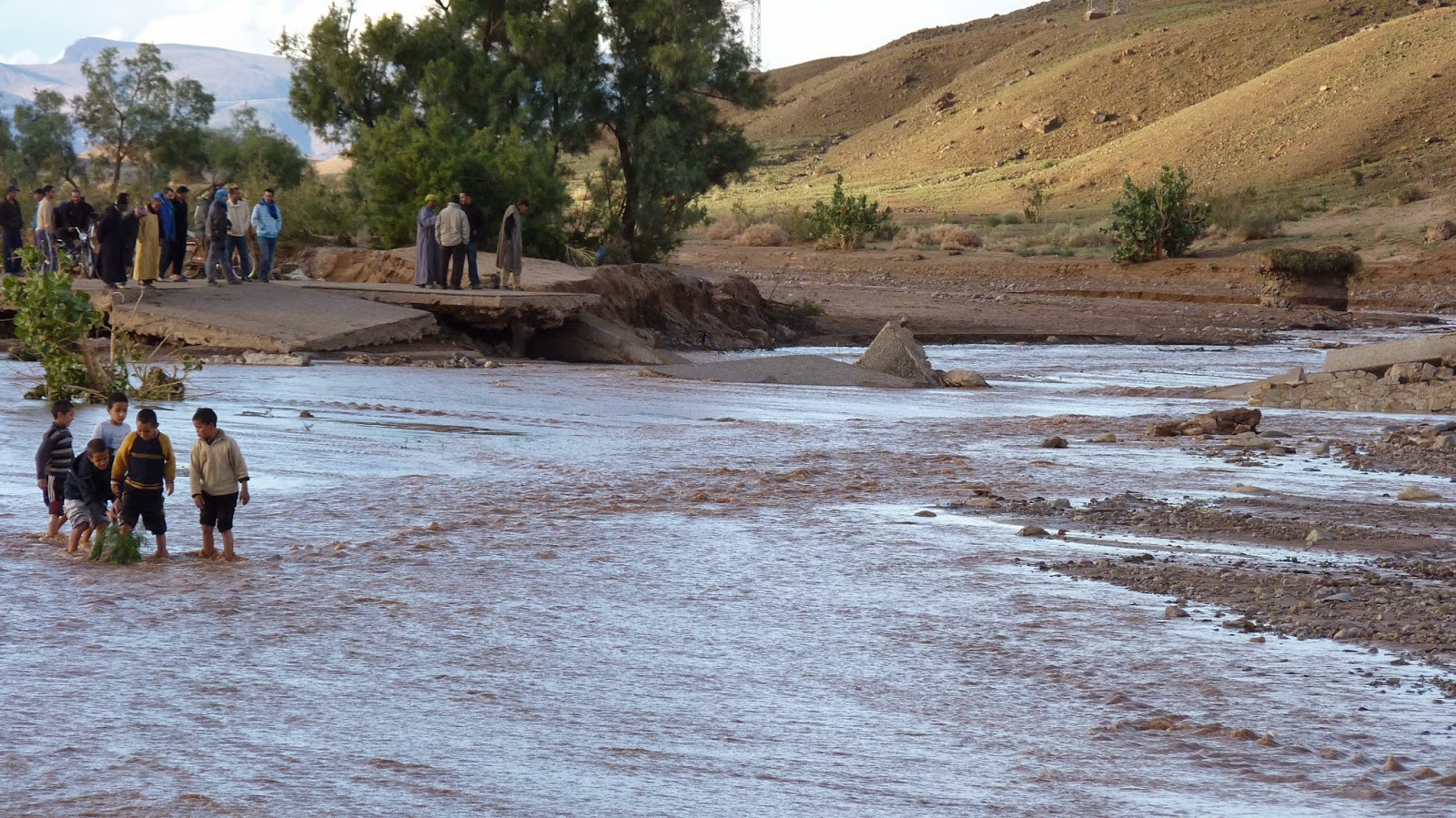 Arriving into Rissani.  A small town we passed through not far from Merzouga. 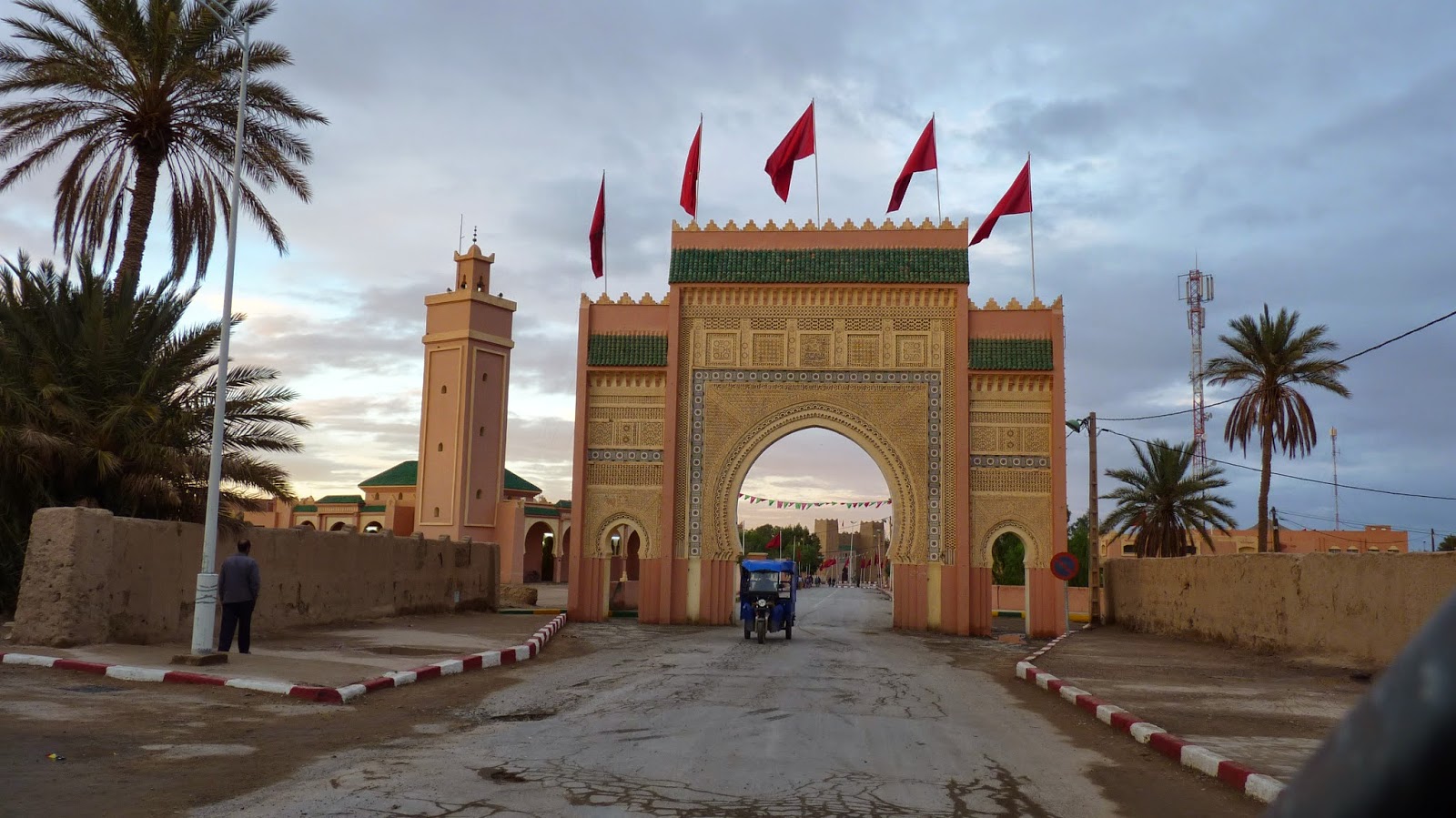 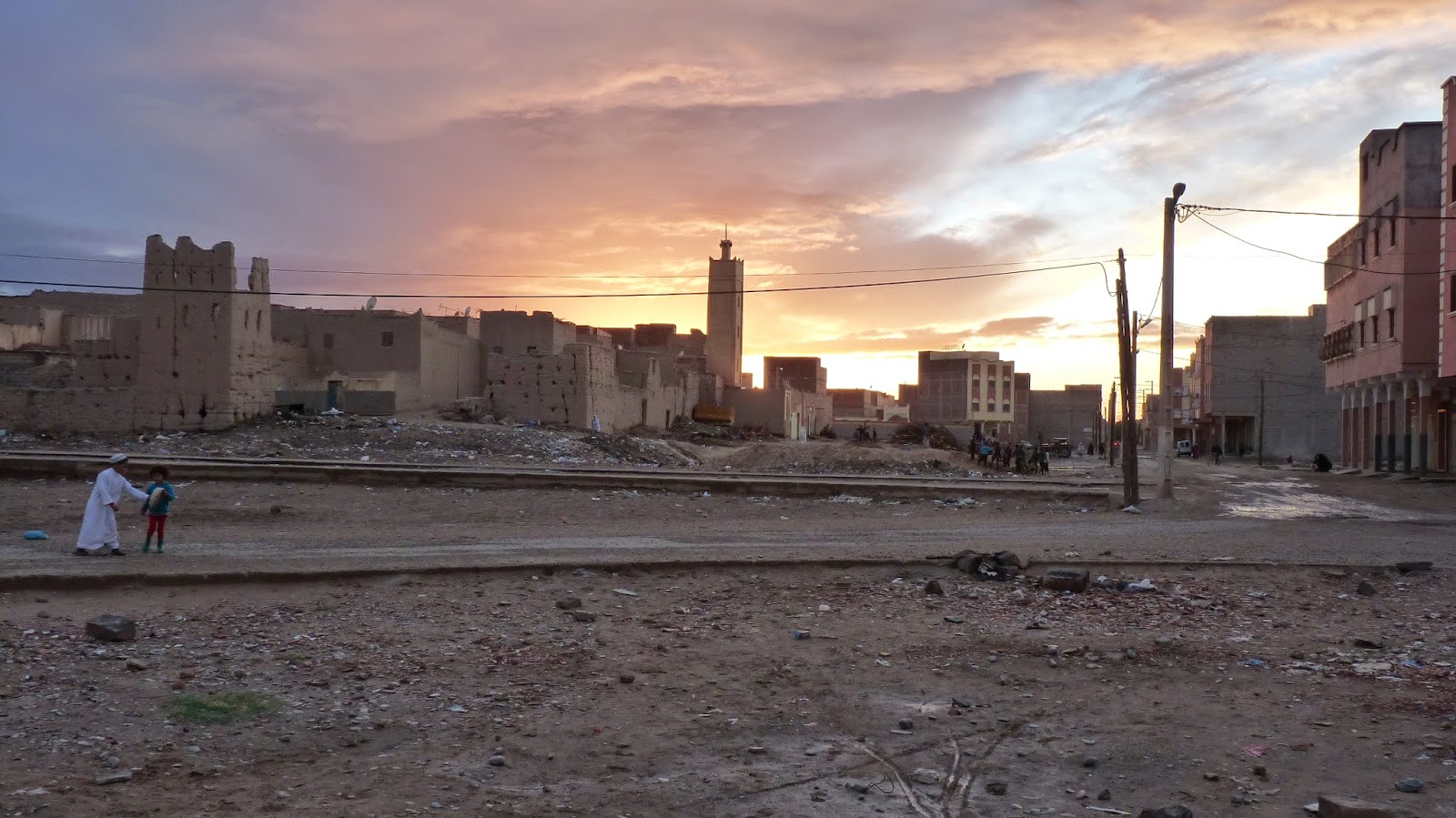 Approaching Merzouga.  The sand dunes are visible in the distance - but that will be the topic of an upcoming blog.