We had a lovely sunny day as we headed out of Elbasan bound for Burrel.  We got on the road later than planned after stocking up on groceries and visiting the post office.  Stocking up on groceries didn't go as smoothly as planned - we've simply not really seen any meaningfully sized supermarkets.  There was a Spar supermarket in Elbasan, a recognised name in Europe, but it was closed when we went there and looking in the window there didn't appear to be much on the shelves.

Bumpy, but much easier than the mud we'd previously encountered.

Just out of sight there was a shepherd minding these goats.  Shepherds with a small flock of sheep or goats is a common sight in the mountains.

Stopping for a cooked lunch at the side of the track.

Micky Moo quietly eating some cheese and guarding her rock while waiting for lunch.

While we were cooking lunch an old Albanain woman rode out of the bushes on a donkey.  She didn't speak a word of English but was very interested in what we were doing.  She wanted to see how we were cooking and the equipment we had in the back of the car.  After our experiences in Romania I was slightly on guard, as in Romania when an old lady wants to know what you have in the car too often it's because she wants it!  But we encountered no such thing in Albania and this woman, who likely lived in one of the small mountain villages we see along the way, was only interested in what we were doing and in the kids.  Quite the opposite of wanting anything from us, she insisted on giving us what must have been most of the nuts she had been collecting. Then she kissed both kids and with that she went to get her donkey, which had wandered off to graze, and was on her way.

Not that anyone is complaining.  It's pretty good.

We see a number of remote houses along the way.

As we got on the track later than intended it began to get dark well before we were near our planned stop for the night; a small town called Burrel.  The last couple of hours was after dark and this was the last photo of the day.

The following morning, packing the car in the courtyard of the guesthouse where we spent the night in Burrel.  I had an interesting chat with the guy standing on the balcony.  He's near the final stages of his solo 7+ month cycle tour.  He started and is ending in France and his travels have included as far as Morocco - all this on his own and by bicycle.

The centre of Burrel.  This is a typical small Albanian town.  It's big enough to have a post office, a couple of hotels and various markets/services.

Mini busses/vans gathered not far from the centre in the morning.

More vans queued down the road - except the last one!  These are just owner-driver vans with a destination displayed on a card in the window. You just get on one that's going where you need to go.  We see these vans using some of the same routes we take.

This small building, despite appearing derelict, is a working business - a tyre repair shop.

This photo was taken after we'd been on the track long enough to get up to altitude and the track was rough enough that cars wouldn't likely come up here.  Yet the area had a number of houses dotted around and medium scale farming seemed to be the main livelihood.

This is a school in a mountain village.

We saw a lot of this sort of thing.  Look carefully and you'll see a donkey's head and the front legs.

Another lunch stop.  Yep, that's Polka cooking at the back of the car again.

Accessing a new route section via another remote village. We had a group of kids run after us asking for treats - probably one of just few English words they know.

Our wild camp for the night, on a small plateau beside the track and high above a river.  This photo was taken in the morning, as it was getting dark when we put the tent up.

Some of the gaps in the wood were big enough to drop a wheel through.  I could also hear the wood creaking under the weight of the Mitsubishi (around 3 tonnes).  It was a bit tense.

Yet this is not an unused bridge.  The section where we encountered this bridge is part of the main route into this area and it is used by cars, vans, mini busses etc. This is just how it still is in some parts of rural Albania, where seemingly resources are too restricted to maintain infrastructure to the standard we're used to.  That said, this bridge was pushing the limits of the term 'poorly maintained', even if the metal work was probably sound.

There was a sense of relief as we got off the bridge.  Further along the road we saw that there is a road improvement project working its way towards the bridge, so at some point hopefully the bridge will receive some long overdue maintenance. 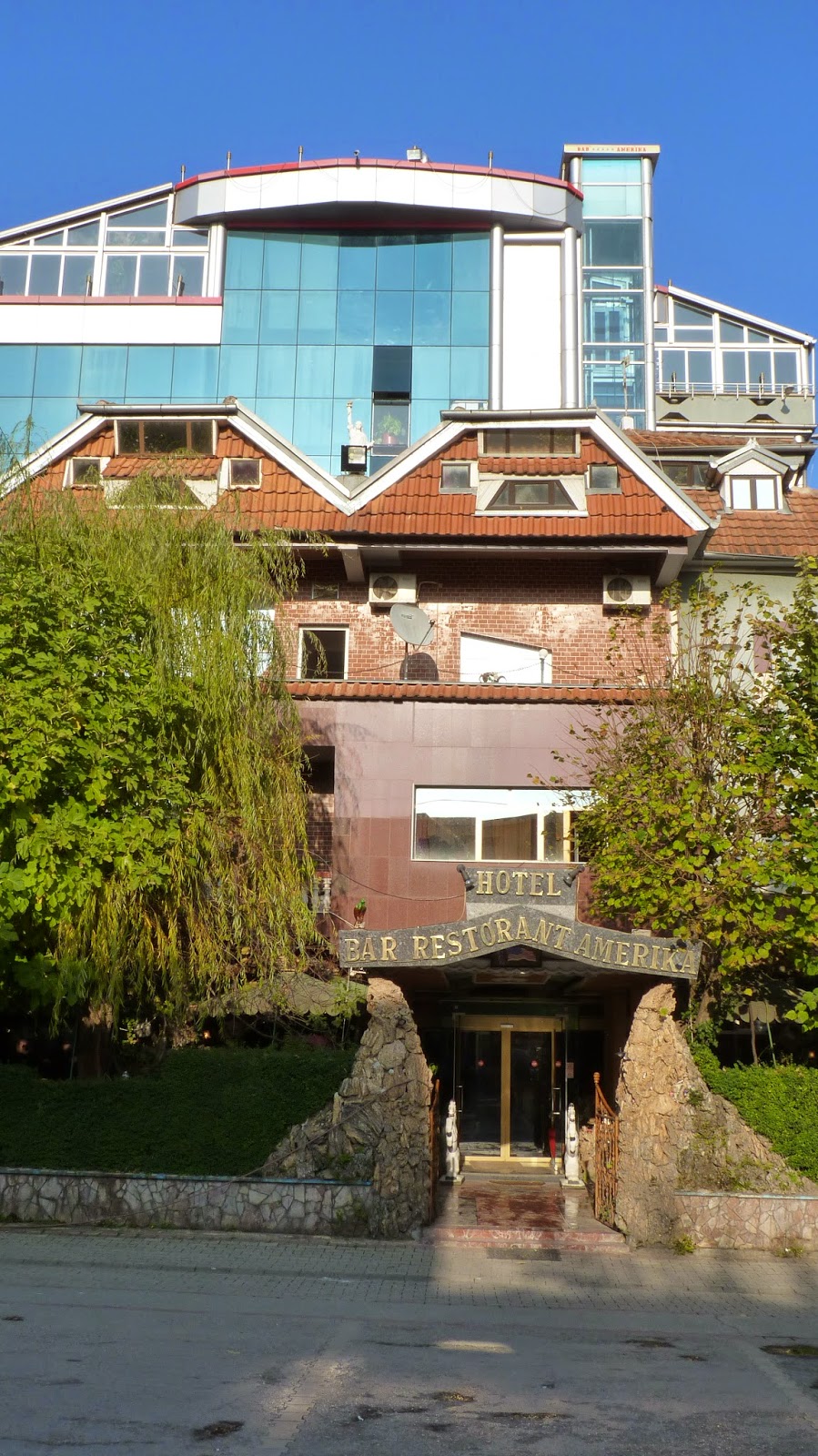 The Hotel Amerika in Kukes, where we spent two nights. It was a very pleasant, relaxing stay.

There are lots of smokers in Albania and smoking is still allowed basically everywhere. Even if there is a sign 'No smoking', it simply gets ignored. Hotel Amerika seemed very popular amongst locals and the restaurant where we had our breakfast was already full of people drinking coffee and smoking at 7 a.m. At lunchtime it was grey from cigarette smoke. 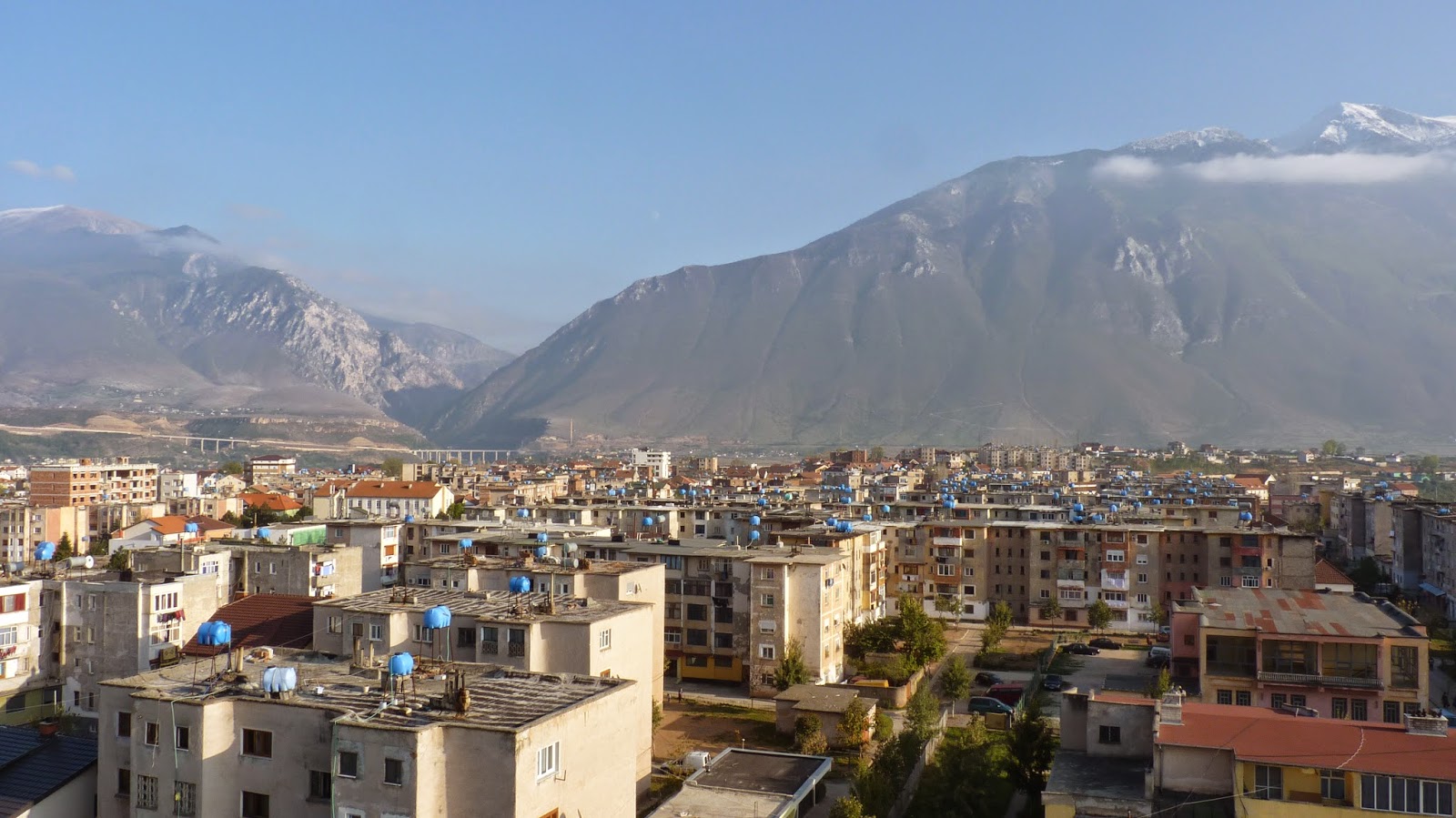 The view across Kukes from the rooftop of the Hotel Amerika.  It's a medium sized town but it had a radio and TV station.
at November 05, 2014