This blog follows on from the previous post, where we were camped in the Moroccan Sahara, just north of the Algerian border (which lies over the mountains visible in the first photo below).

The GPS track shown on the map below is for our whole Sahara route, including this post and the previous (Part 1) post. 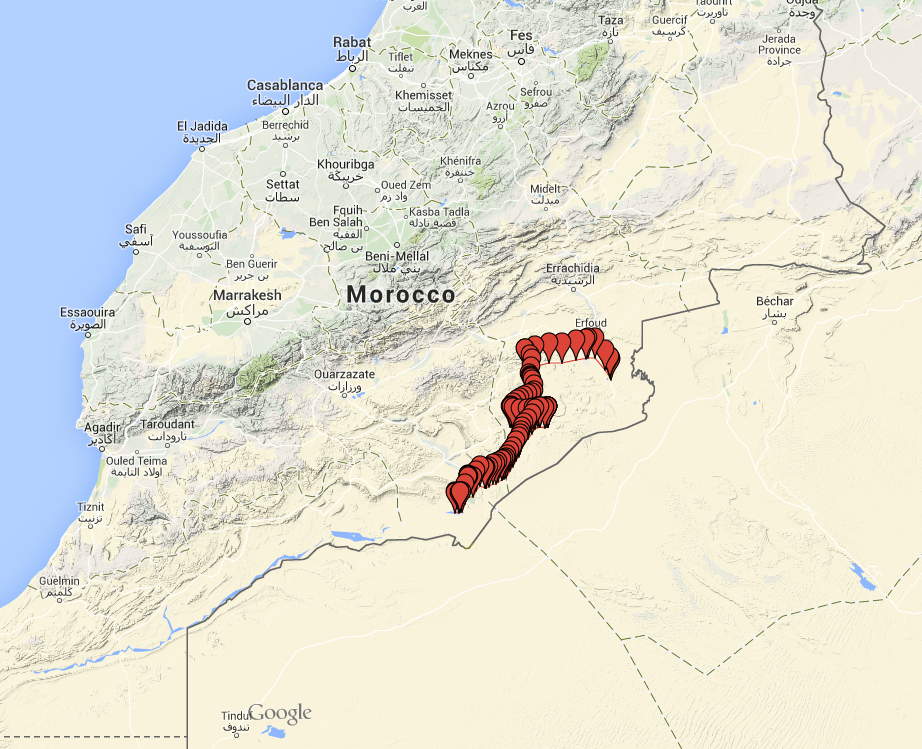 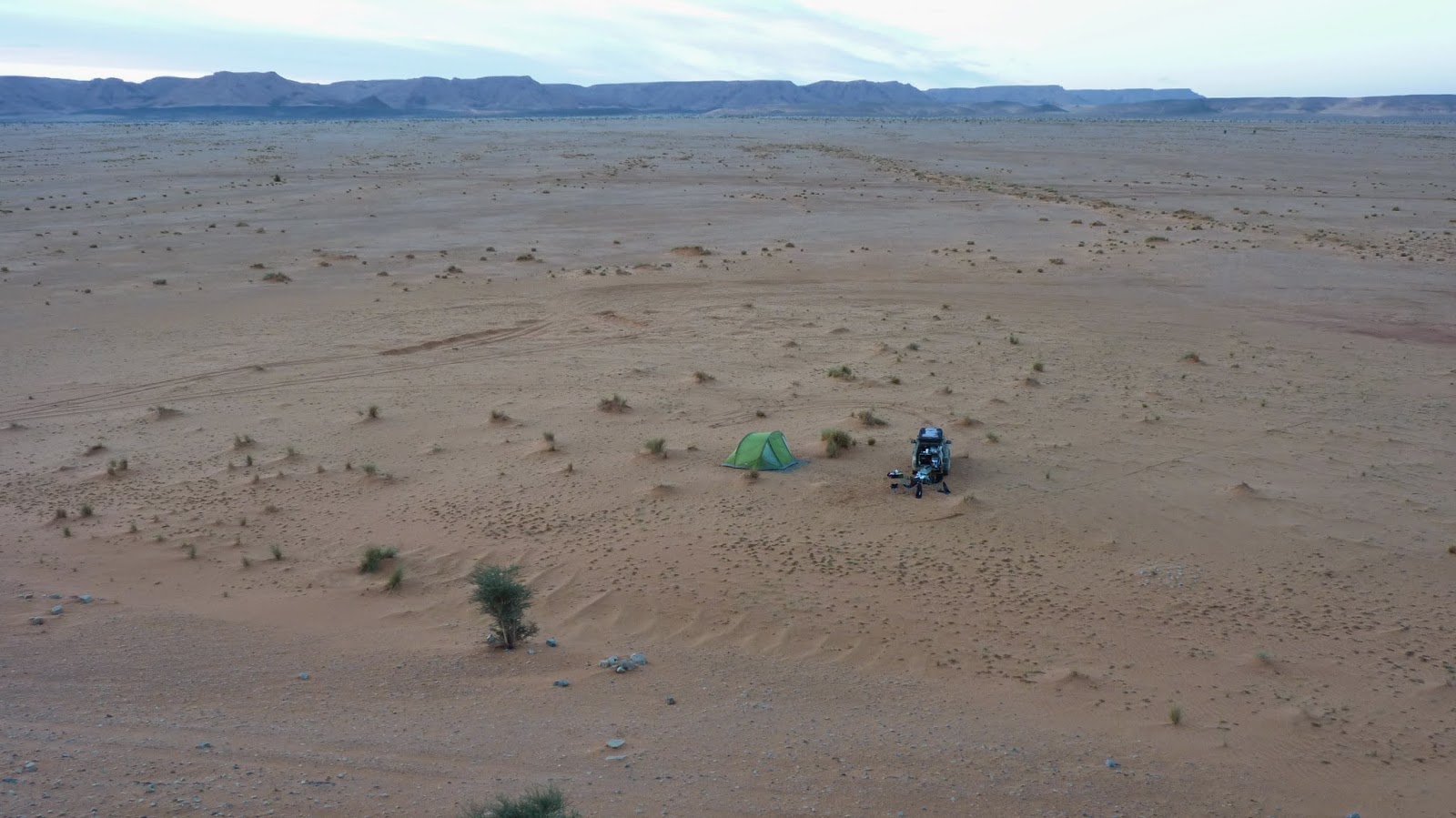 From up on the same rocky outcrop that I took the photo above (and using quite a bit of zoom on the camera) I could also see Tafraout Sidi Ali across the lake - a lake that seldom actually contains water and only does now owing to the recent unusual rains.

Sunrise in the Sahara 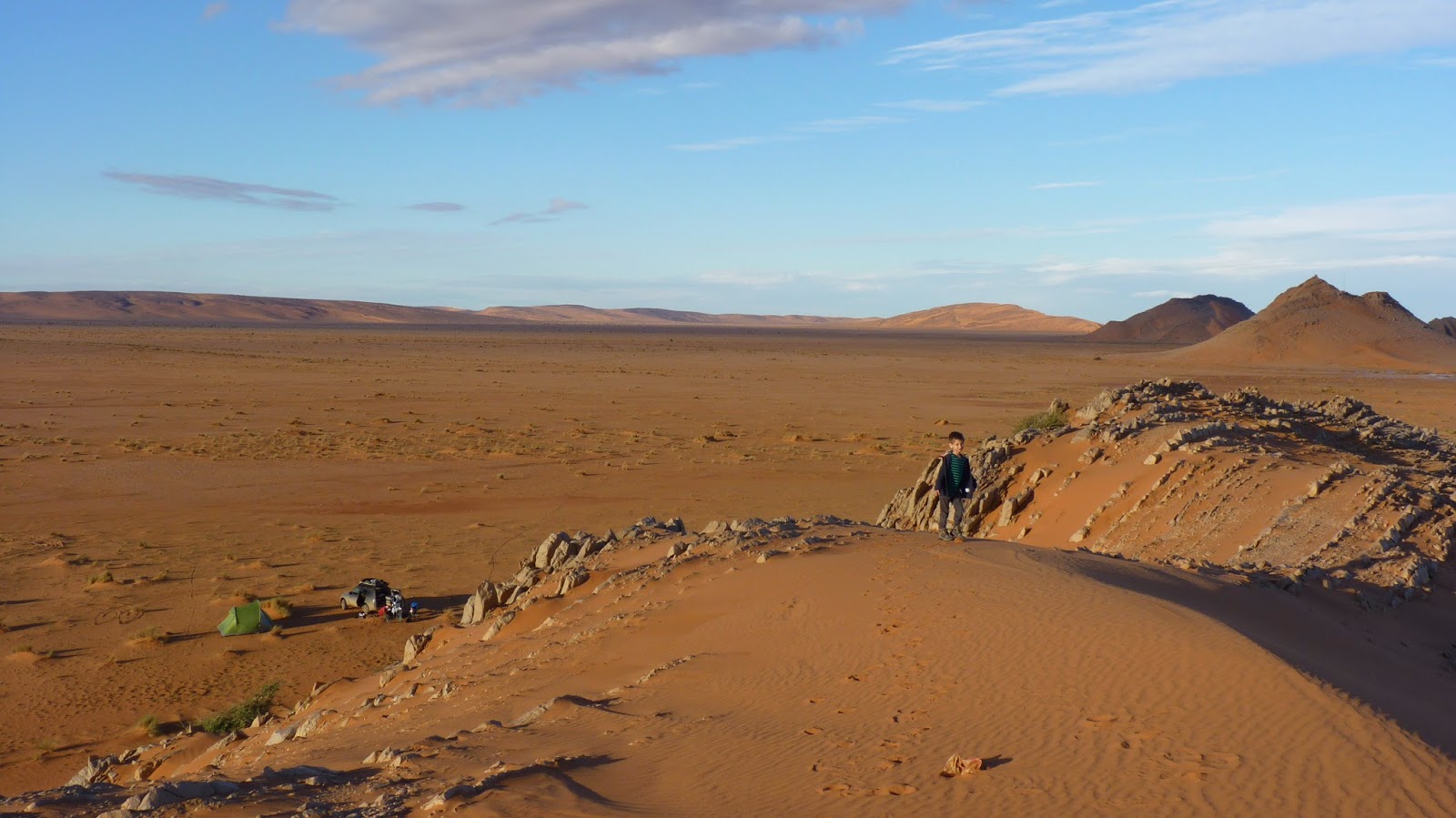 What an action Bean!

But we couldn't play all morning, as we wanted to make it back to civilisation before dark.  So we had to get back on the road.....er sand. 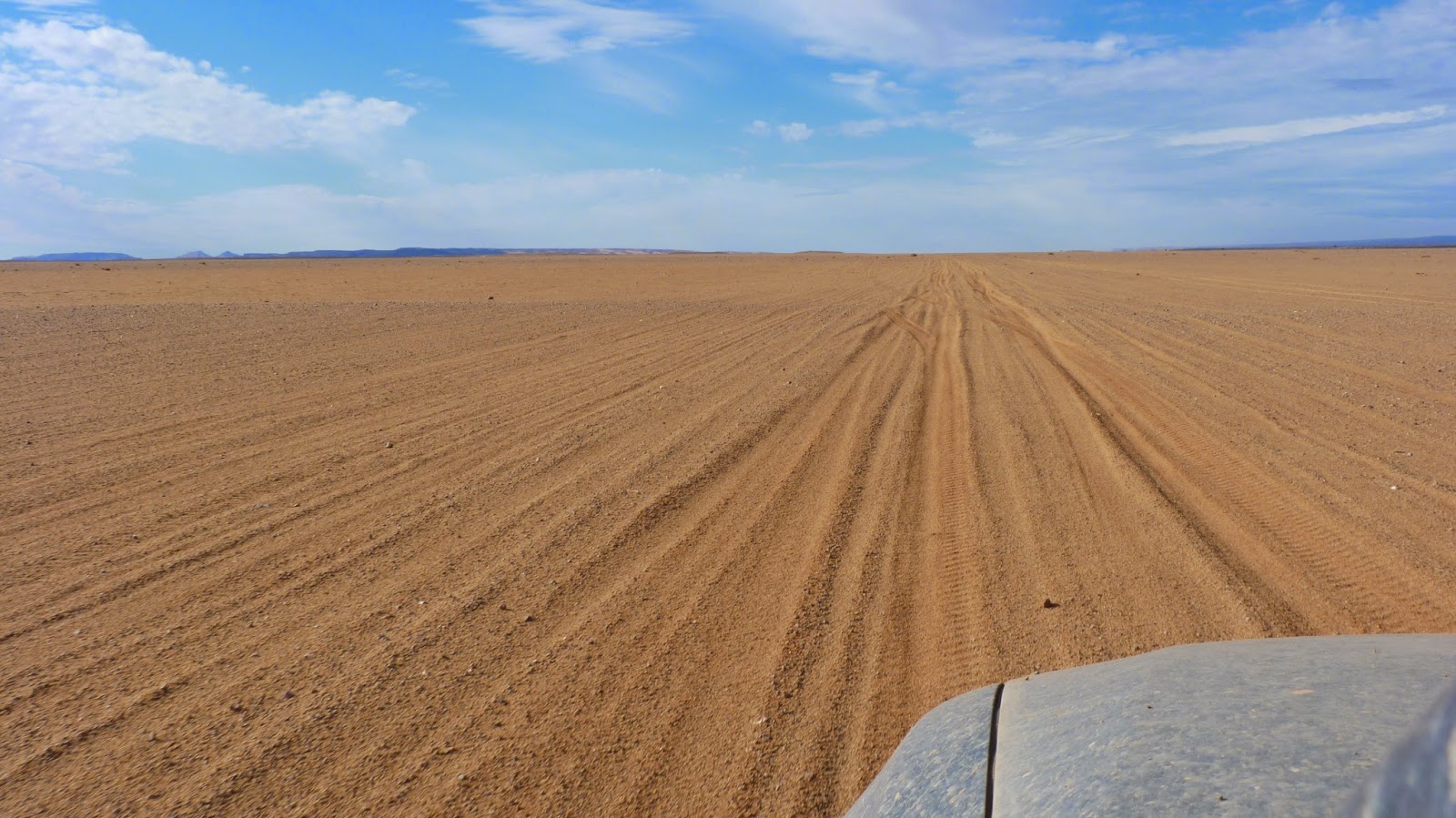 A Moroccan army patrol zooming across the desert.  We still weren't too far from the Algerian border so we observed a regular army presence.  This is a big part of the reason I felt safe out here, despite the proximity to Algeria and knowing that some tourists are avoiding the area. 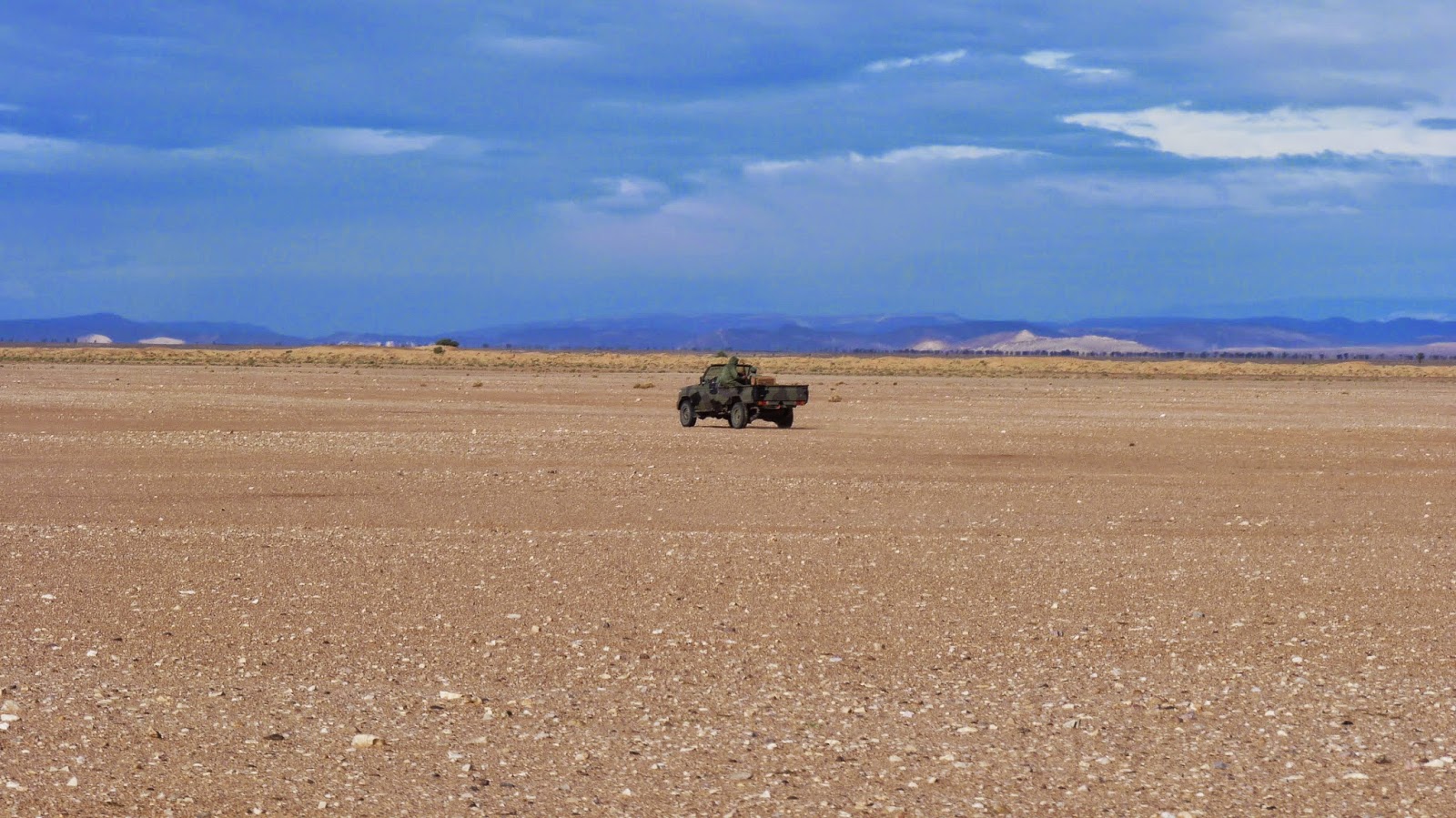 Miles and miles of high speed (when not too bumpy) open terrain.  We relied heavily on GPS to ensure we were going the right way. 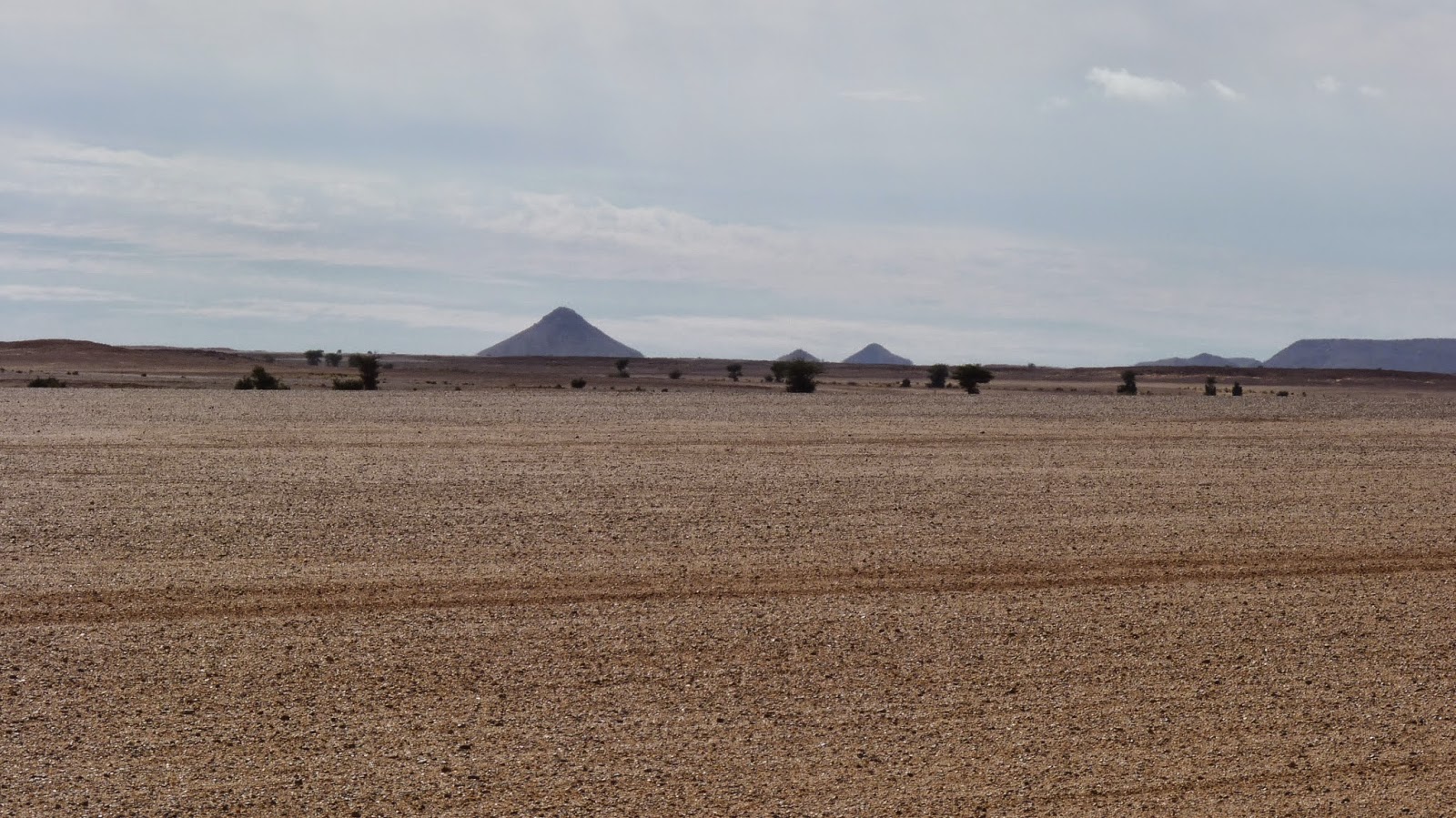 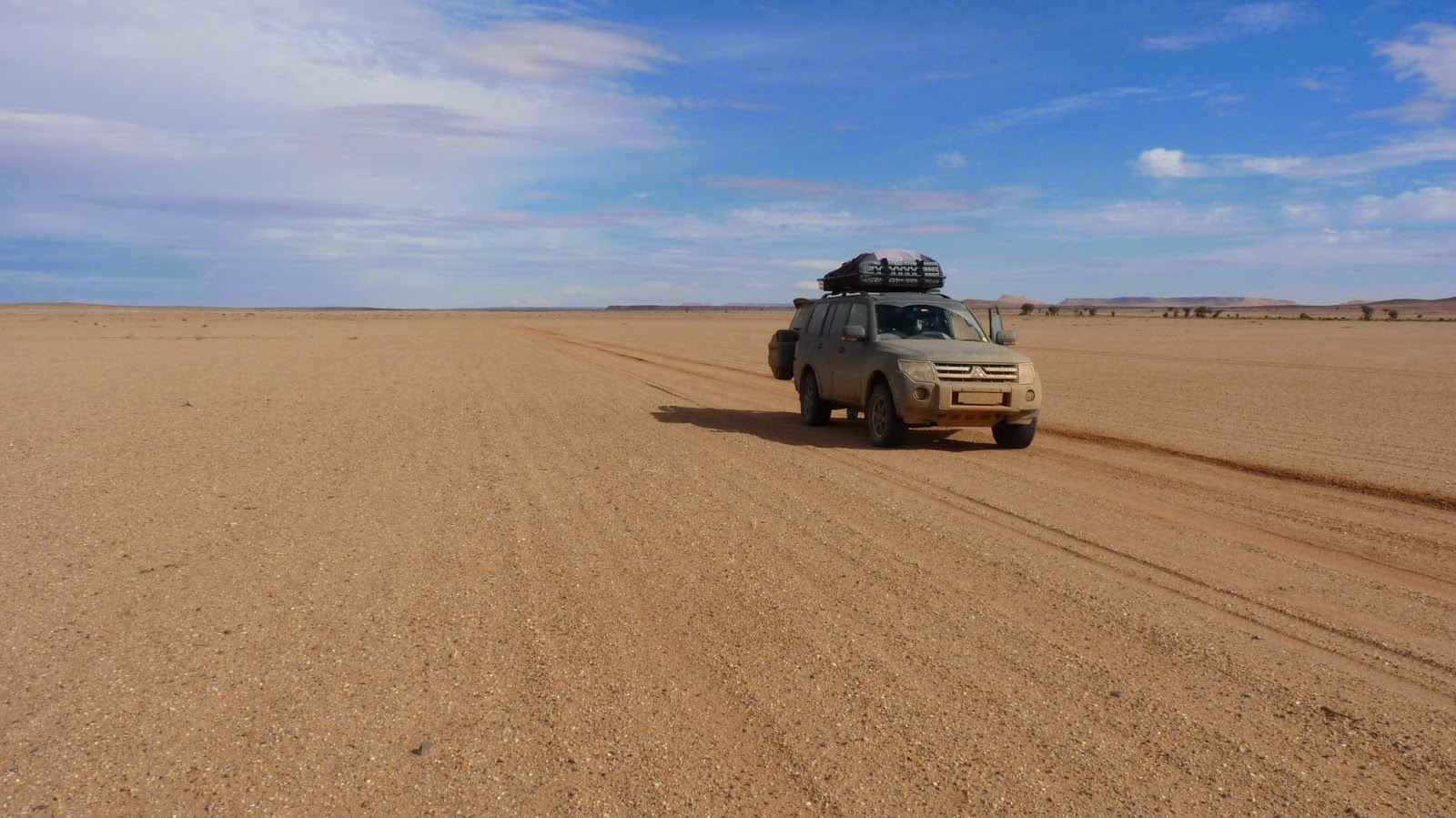 A soldier checks and records our passports before we can continue onwards. 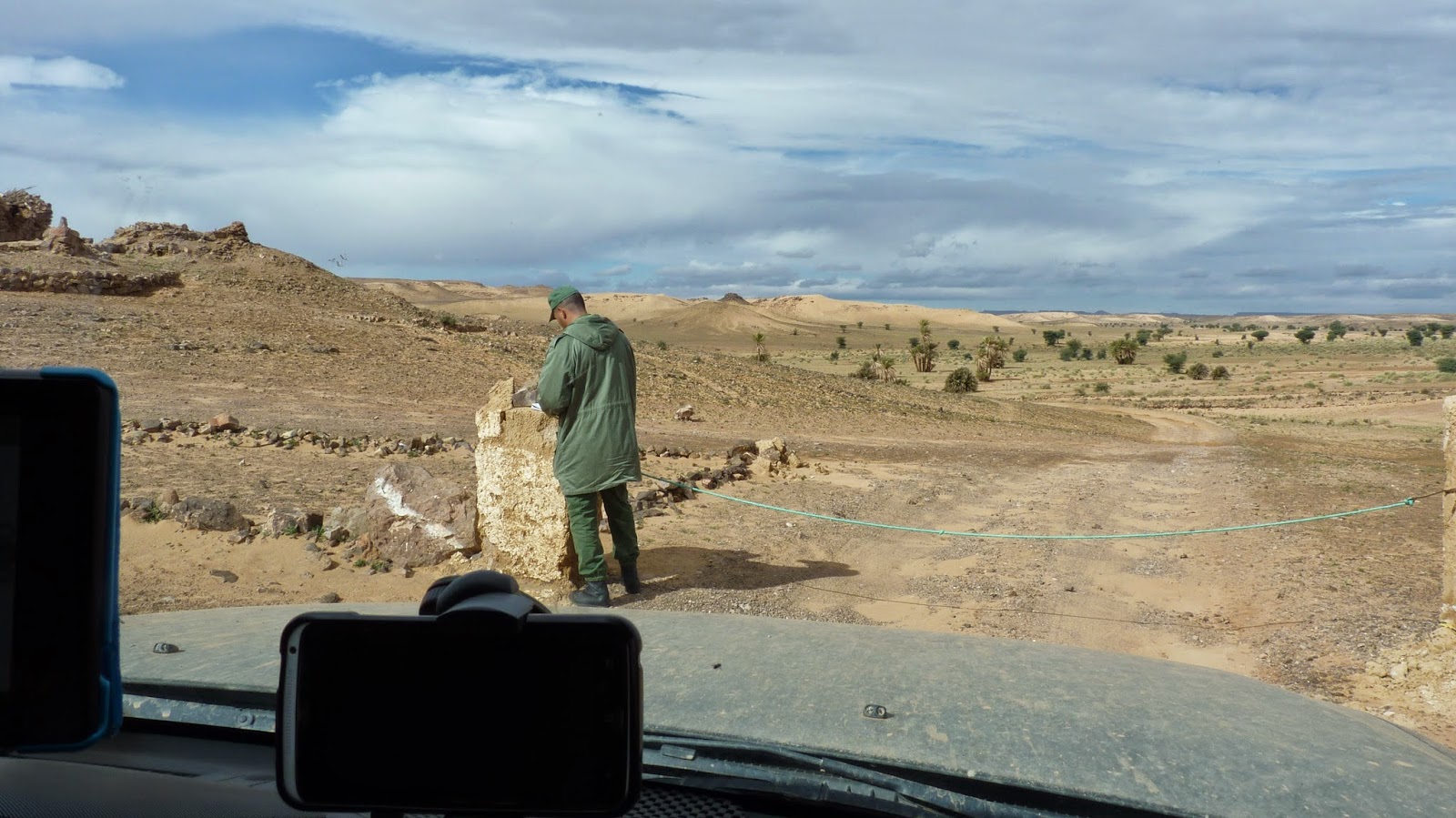 Our only real obstacle encountered once finally on this route.  A few days earlier this small river (which would ordinarily be dusty and dry) would have been a raging torrent of brown water owing to the unusual rains.  You can get an idea from the photo below how wide the wall of water must have been - wide enough to wipe out the river banks. 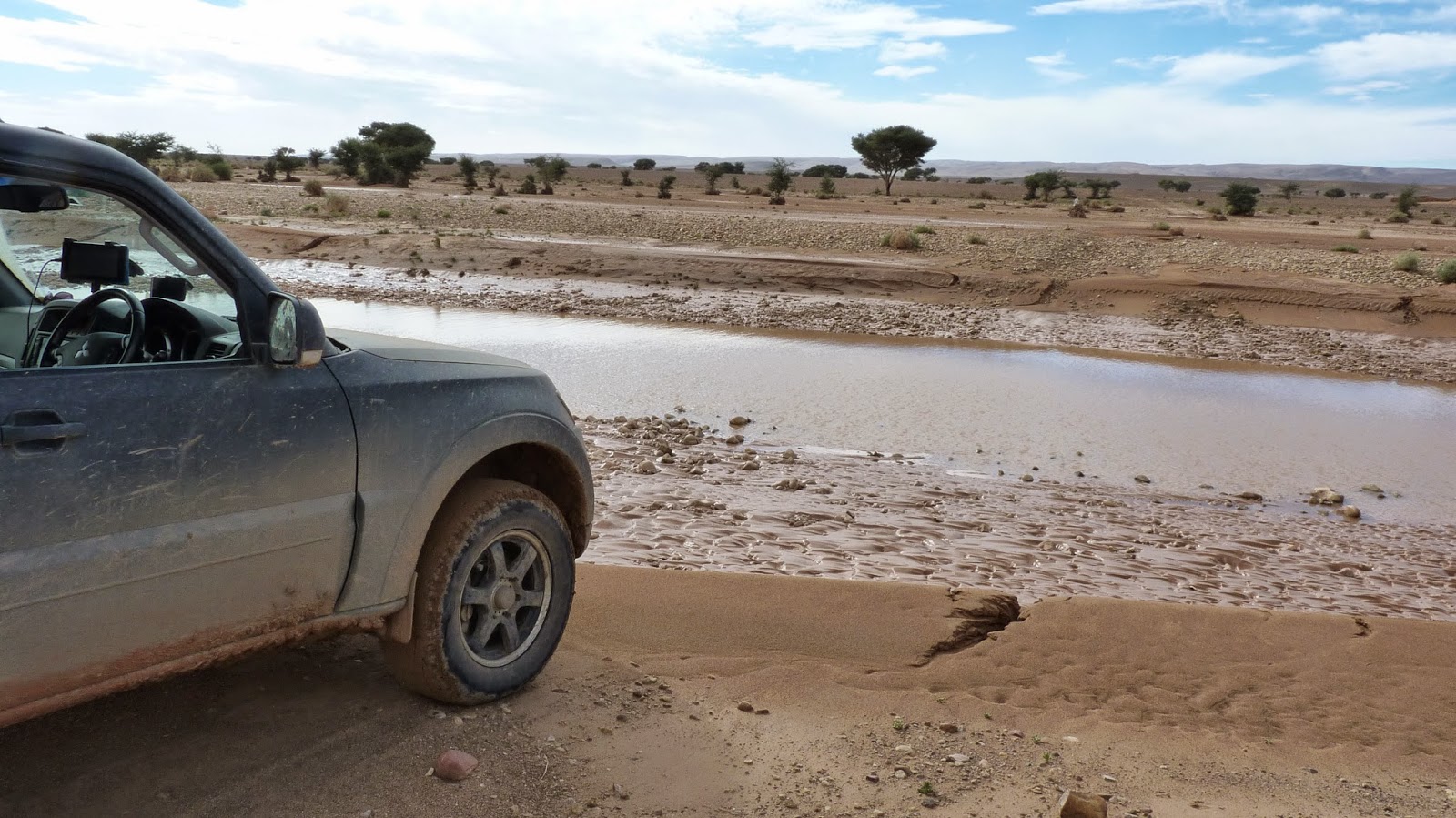 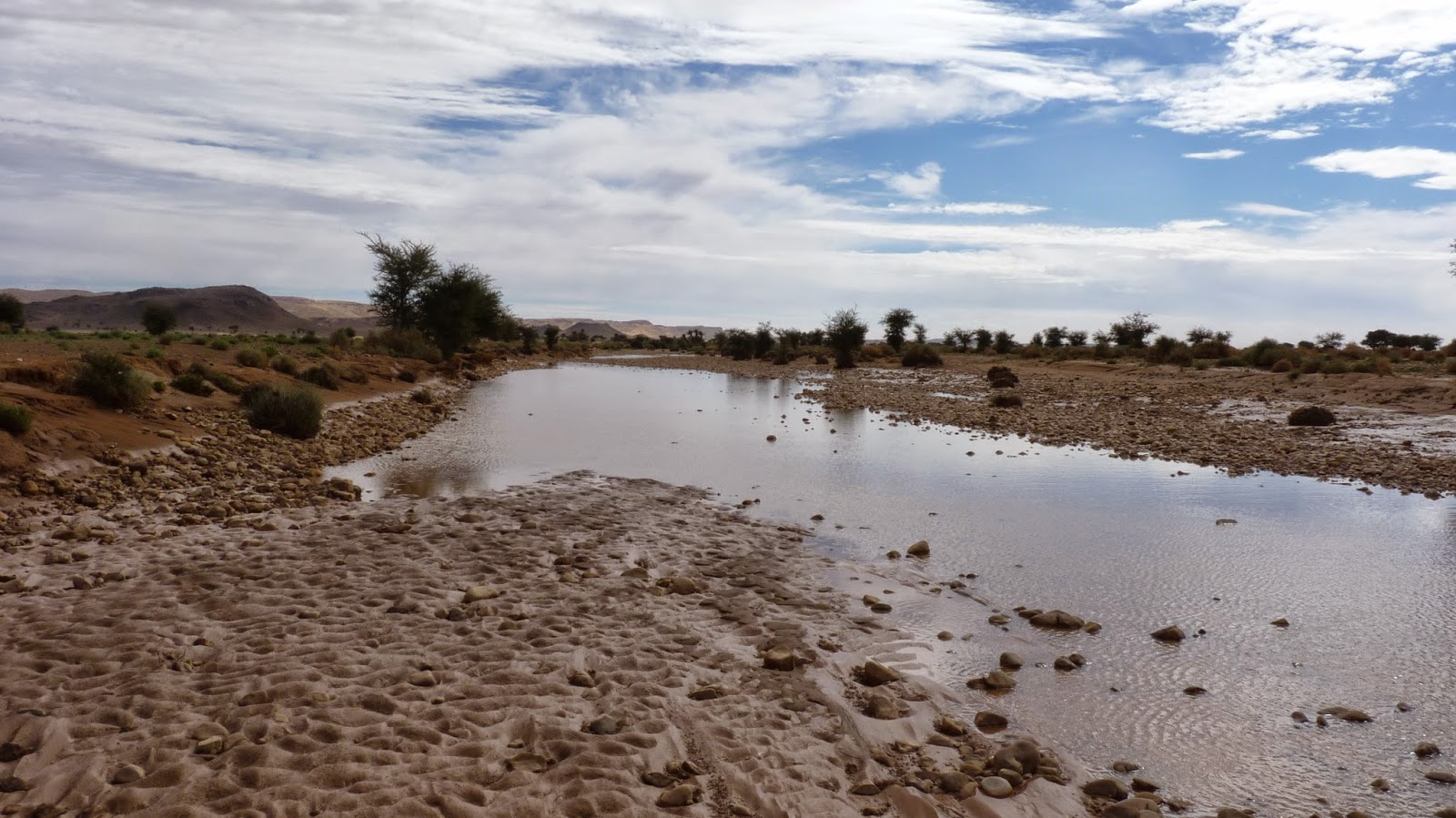 I decided it didn't look like anything we couldn't cross without too much trouble, but then you don't want to assume too much out here when alone.  So I went on foot to find the most suitable spot to get across and we were soon on our way again. 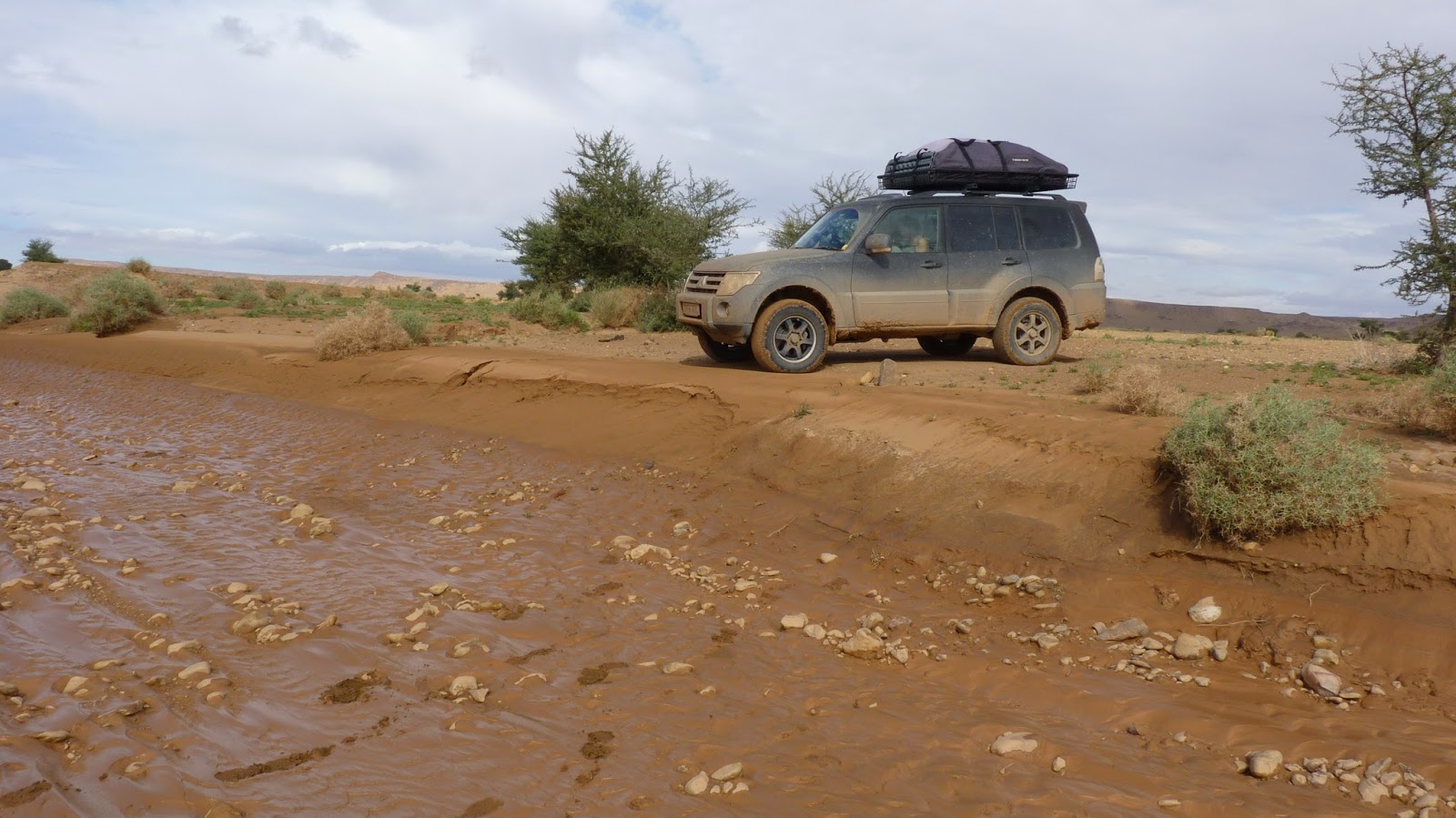 Next we had to go up an arid hill and over a small pass.  The views from the top were stunning. 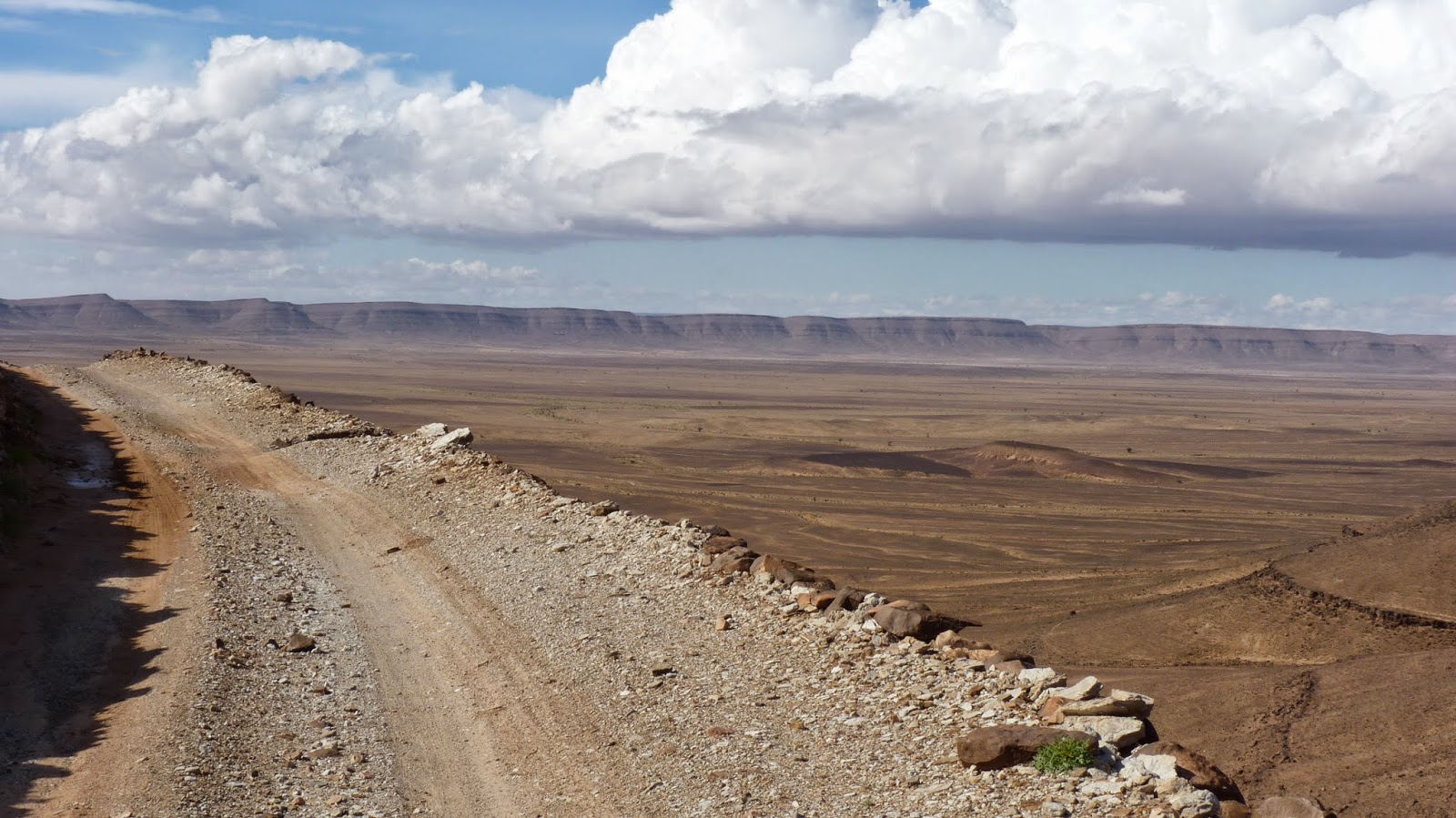 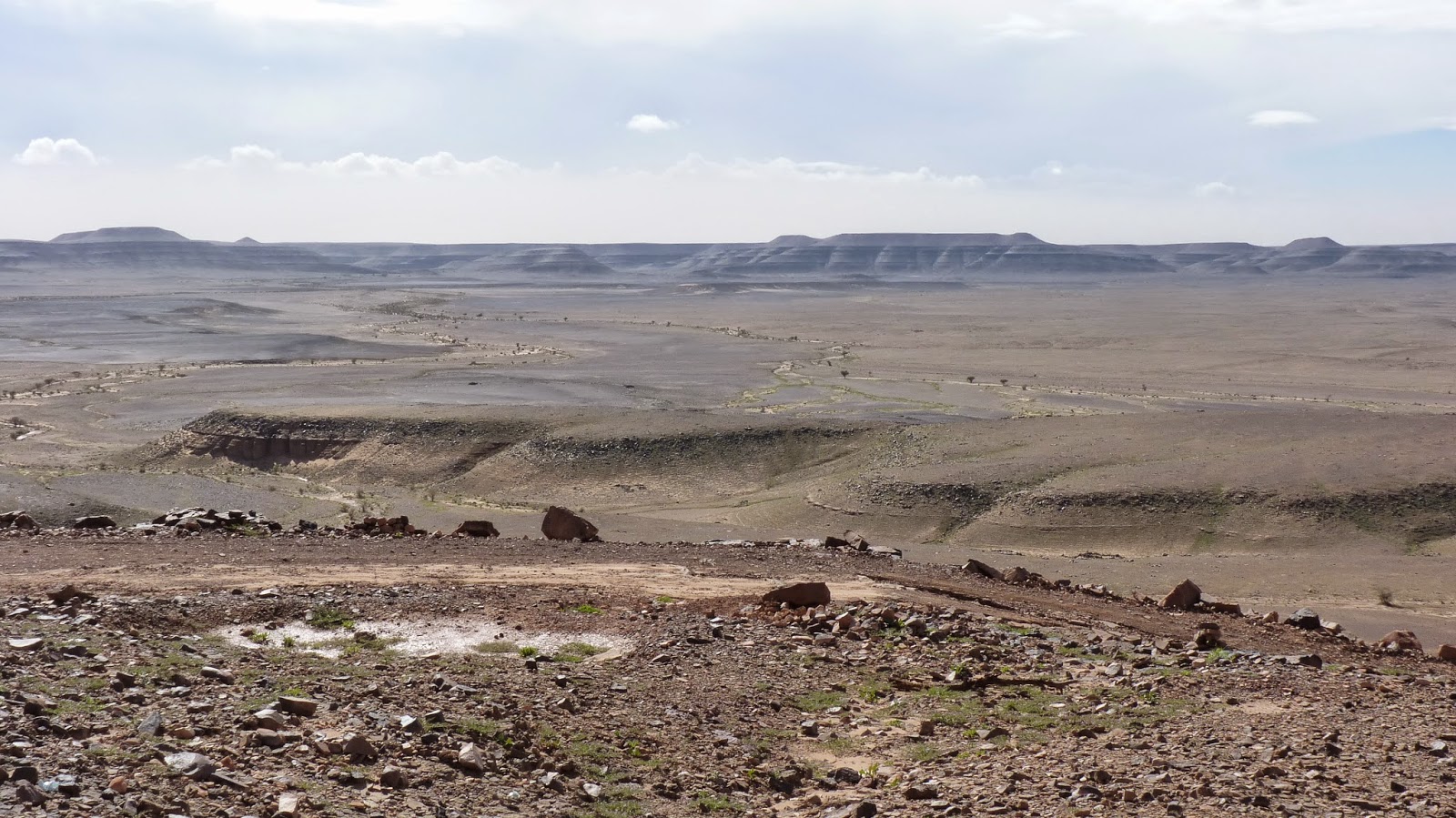 This is a desert well.  There are a number of these around and as you can see there is indeed water at the bottom. 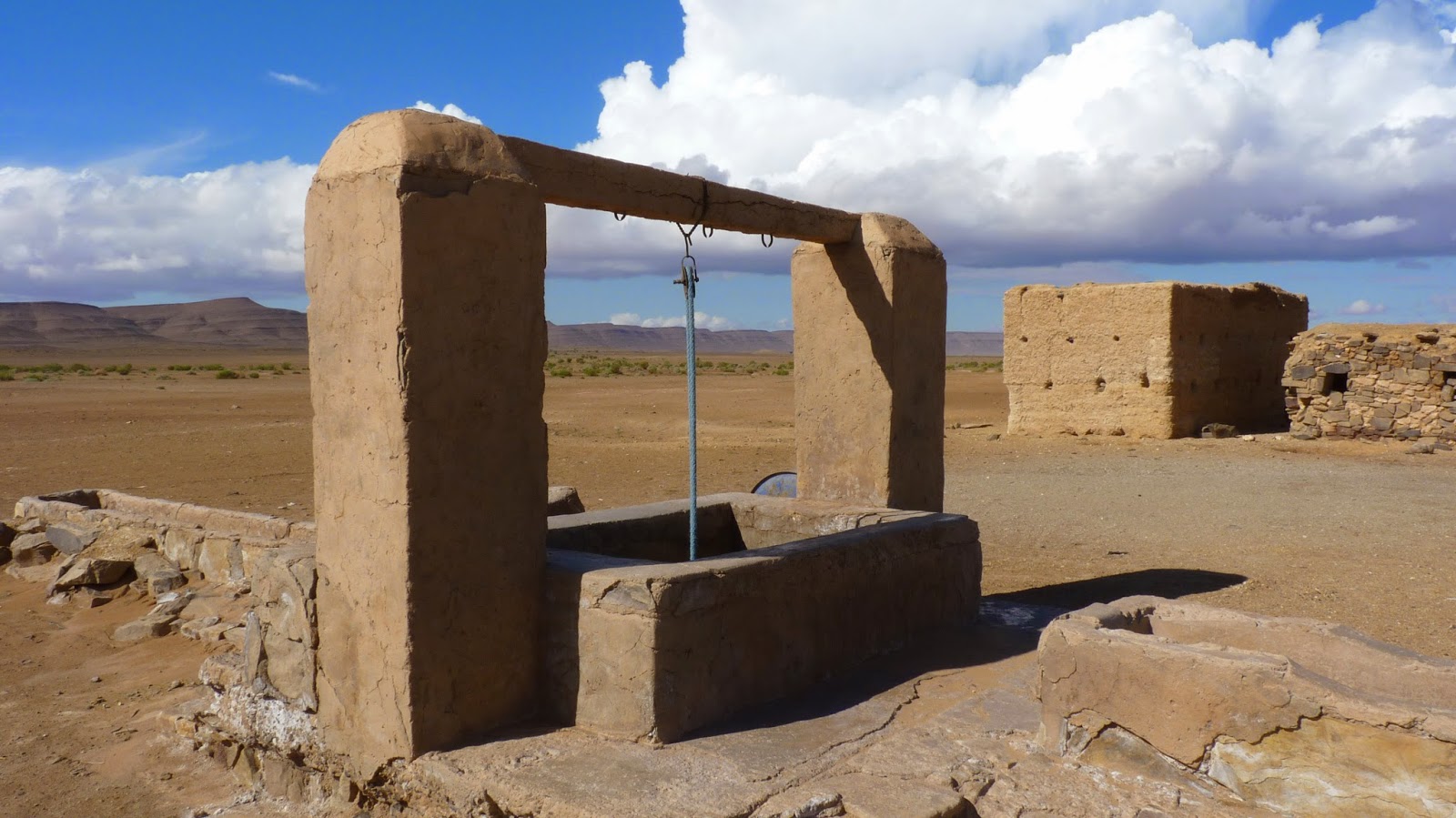 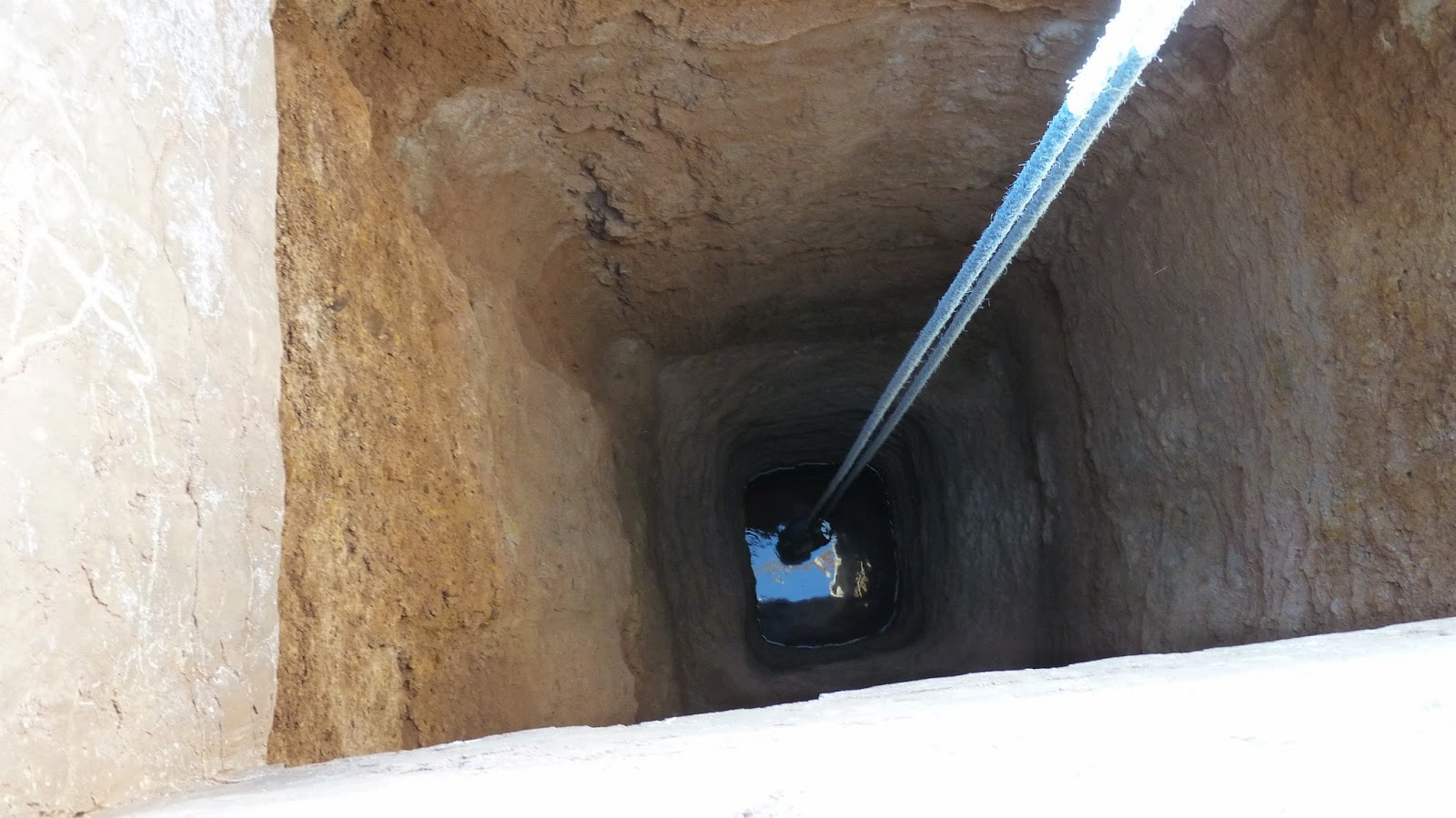 Another small pass to climb ahead. 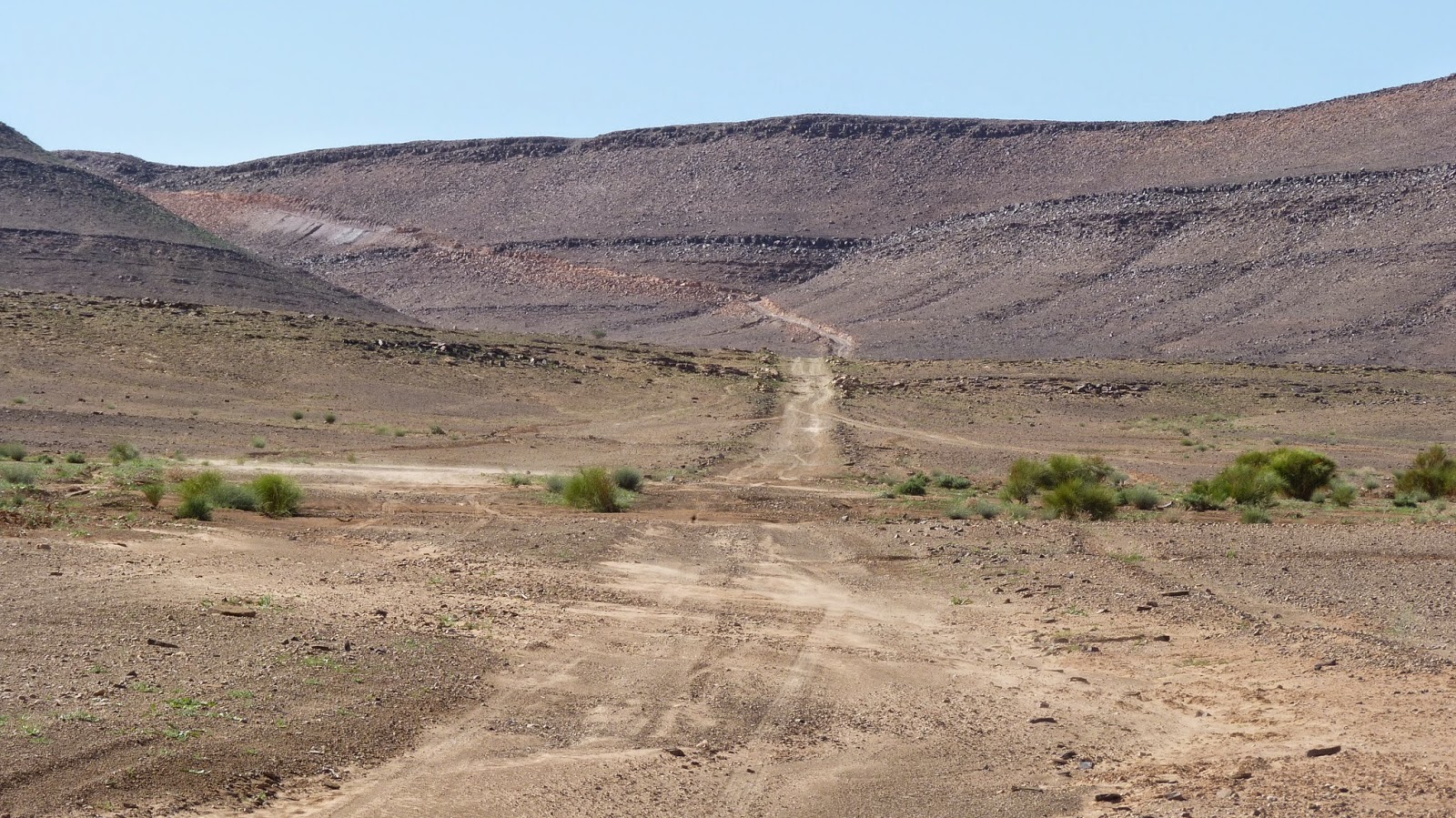 Getting near Tagounite.  There is a large river that flows through this area, which provides water for all the palm trees visible in the photo below.  It was still quite wet here due to the recent rains and flooding. 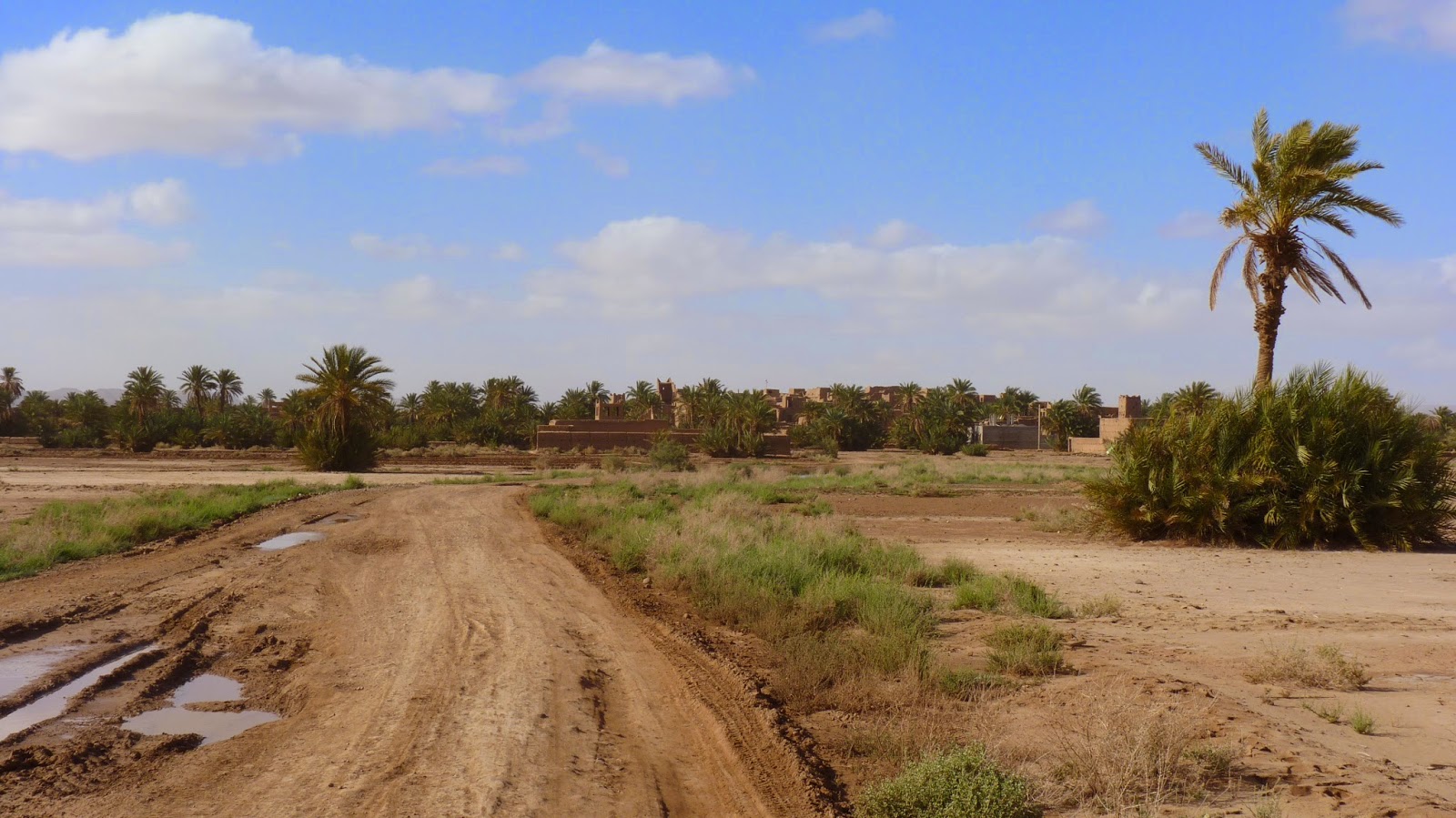 After reaching Tagounite we passed through Mhamid, shown in the photo below. We had plans to continue for another couple of days offroad from Mhamid, taking in the Erg Chegaga sand dunes along the way. But due to forecasts of more serious rain coming we were advised by locals not to risk setting off, so we changed plans (again!) and ended our Sahara route there. Never mind, I still have some more photos to post of another Sahara route we did (after the rains cleared) right through to the coast, driving along cliff tops above remote beaches. 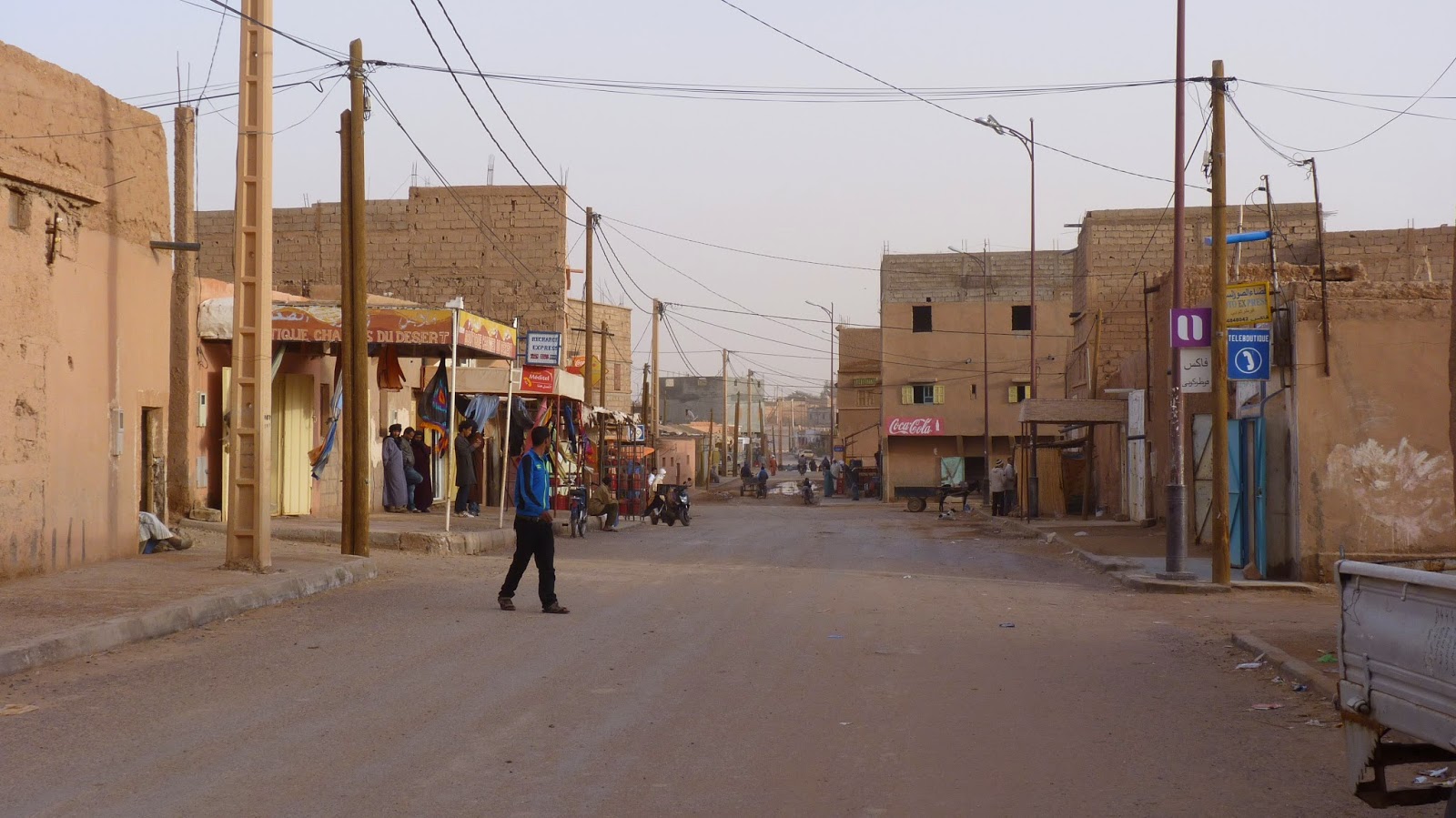 Our accommodation for the night - a mud and wool berber tent.  The thick wool keeps the inside well insulated and dry.  It's surprisingly comfortable and cosy. The original plan was to carry on to the dunes and camp there but Anastazja got sick and Polka felt it was safer to be close to or in a town just in case she needed to see a doctor.

We enjoyed spending a night there also due to the owners: a German theoretical physics researcher and her Nomad husband whom we didn't meet until the next morning. It was interesting to get some insight into Nomads' lifestyle and especially the trouble Nomad parents have with their children. She herself is involved in organising schooling for those children as they don't learn to read and write unless they leave their parents and their lifestyle and come to boarding schools. Unfortunately for them and probably even more for their parents this usually leads to these children trying very hard to be accepted by other social classes in Morocco (Nomads are considered the lowest class and they often only speak Arabic whilst majority of other classes speak Arabic and French) and as a result they may not go back to their families. The lady is attempting to organise teachers who would travel with Nomad children and teach them in their own environment rather than taking the kids out of it. The lady's husband himself never went to school, however he spoke three languages and obviously runs a successful business.

During our stay there we finally realised how unusual and dangerous the recent rains were: death toll of forty, broken bridges, washed out roads, tourists stuck in nearby dunes, Erg Chegaga, that had to be rescued by a helicopter. The second lot of rain had been forecast for the day we were planning to go to the dunes so obviously we had to change our plans once again. We headed for Ouarzazate with still unwell Micky.

We decided to stop for lunch in Zagora not expecting any trouble on the way to Ouarzazate but we underestimated the weather. There were two rivers/fords to cross just before Ouarzazate and by the time we got there, the first one was already filled with a huge amount of water making the crossing impossible.

There was nothing else to do but to turn back to the nearest town called Agdz, where we spent the night in an old kasbah pictured below - we were the only guests. Anastazja was still unwell - we suspected only a stomach bug/food poisoning which isn't anything unusual for Morocco.

All the rooms open directly from the court yard and they are just a single room containing several beds.

By the morning the rain stopped and we could continue all the way to Ouarzazate. Since Aaron had to be in Marrakech in a few days and we already experienced quite a bit of trouble due to the rain moving on straight away seemed like a sensible decision. Ouarzazate was as far as we could get though, as there was no way out in any direction other than where we came from. The roads stayed closed for the next two days and so we had to stay in Ouarzazate.

In the meantime Anastazja was getting worse. Polka was considering calling a doctor at some point the first night in Ouarzazate but decided to wait till the morning. Anastazja's condition didn't improve so we took her to local hospital where she was seen by a paediatrician and admitted to hospital. She had severe diarrhoea, high temperature, was dehydrated and didn't recognise anybody. Fortunately with the right medicine, including intravenous antibiotics, we could see improvement by the morning. That was the day when the road to Marrakech opened. the paediatrician had some reservations about discharging Micky, mainly due to her lack of appetite, but Polka insisted that she could take care of her. Marrakech seemed like a better place if we needed further medical help. So with two different antibiotics and other medicines we finally headed for Marrakech.